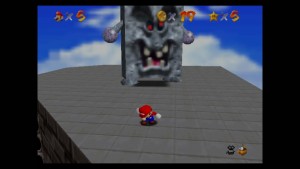 Look, there’s not lots to write about this that I’ve not written before. Super Mario 64 is one of the best games ever made, on any system, ever. That’s just a fact, and playing it through again did nothing to dissuade me. Of course, I’m still not sure if Super Mario 64 is better than New Super Mario Bros U, or if it’s the other way round, but I can be sure the two of them are at positions 2 and 3 in The Best Games Ever. 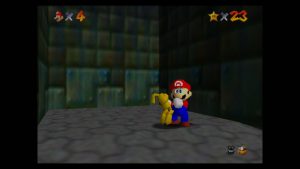 The Wii U Virtual Console version is barely different to the Wii Virtual Console and the N64 original, but the graphics seem a little sharper (probably only because it’s now HDMI rather than any changes Nintendo have made) and of course the buttons have moved on the Wii U Gamepad. I moved A and B to B and Y though, so it’s more like an N64 pad, and didn’t have any issues – it feels just the same as it did before. 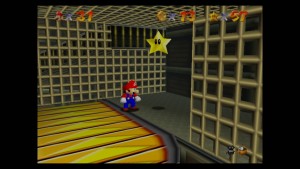 One addition is the availability of save states, which was useful as I didn’t need to pause the game for hours if I needed to do something else.  Oh, and you can take screenshots now, obviously.

Is it just me, or is the game now significantly easier, though? In particular, on previous playthroughs, I’m sure I struggled on at least one of the Bowser levels and getting 100 coins on Rainbow Ride in the past, but no such issues this time. In fact, I’ve had very few deaths at all, all things considered. Maybe I’m just a lot better than I thought. Yes. That’s bound to be it. 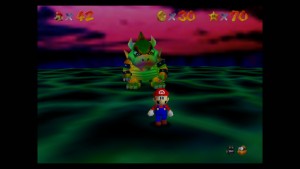 Even after nigh on 20 years, Mario 64 is still gorgeous to look at, listen to (the tunes are probably more memorable that pretty much any Mario game since – or any game since, perhaps) and play.  The controls are slick, Mario leaps and flips and dives in a fluid way no other game, not even later Marios, has ever managed. It’s an utter joy from start to finish.