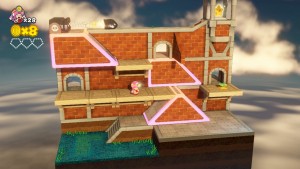 First up, here’s a massive spoiler I don’t mind giving away: Captain Toad is actually the prequel to Super Mario 3D World. I mean, everyone knows it’s a spinoff based on the Captain Toad levels from 3D World, but the end sequence of Captain Toad actually shows how it’s a prequel, what with Toad returning from his adventure then setting off to the Sprixie Kingdom after green stars. Who knew? 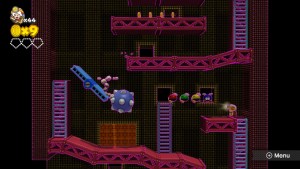 Captain Toad is pretty much just more levels like those Toad levels in 3D World. They’re more complex, there’s a hell of a lot more of them, they’re more varied and more clever, but you can see where they come from quite clearly. Toad sets out to collect a star on each level, solving puzzles to get there and optionally collecting three (sometimes hidden) gems in each. Well, I say optionally – you need some, but not all of them, to unlock some of the levels. You don’t appear to get anything for collecting all of them in the entire game though, which was a bit odd. 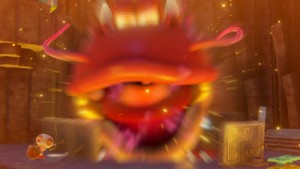 Toad is useless in a fight, and can’t jump, so most of the enemies need to be avoided or beaten in other ways. You can throw things at them, or drop onto them from a platform, or use other baddies to take them out for you, which totally changes how you play compared to Mario games. It looks like a Mario game, sounds like a Mario game, but really doesn’t play much like one. Even some of the levels look like those Mario plays through in 3D World (in fact, some even ARE from 3D World), but with a  different set of skills, the route to the end is not the same. 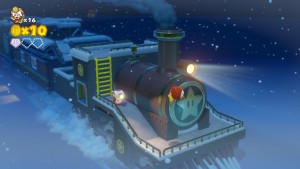 Like 3D World (and Mario 64, Mario Galaxy, and so on), there are fresh game ideas galore, and many are used just once. If only other game designers had half the skill in coming up with ideas. Even those Mario clichés seen before are used differently here.

It’s pretty easy, although each level has an additional target (such as don’t get hit, find a hidden mushroom, collect a number of coins) most of which I’ve missed so far. Part of the reason for missing them is that you don’t know what they are until after you’ve completed the level, so unless you obtain them accidentally, you have to replay the level. Not that replaying levels is a chore – you don’t need to re-collect gems, so you can avoid some of the puzzles, and each level is pretty short. 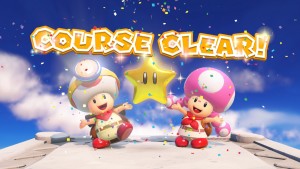 In addition to all three “episodes”, I’ve also completed everything currently unlocked in the bonus section – levels from 3D World, the Toad Brigade levels (repeated levels where you have to find the rest of your troop and take them all to the star), and the Mummy Me chase levels – although the bonus level “book” is still far from full, so I expect there are more bonus levels if I complete all the level targets.

Captain Toad is quite short, quite easy, and very, very lovely.