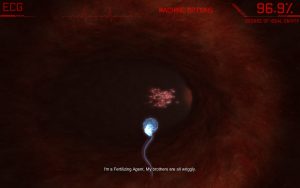 Way back in the primordial past, when games were made from rocks and cost as much as a family car to buy, there was a game called Deus Ex Machina. I’ve never played it. I’ve read a lot about it, none of which makes any sense. From what I can discern, it was more an experience than a game, and consisted of some minigames that you played while listening to an audio tape. Because, of course, voices in early 1980s computer games were limited to “HNNGHSLUMMMNDMUH” (“he slimed me”) in the Ghostbusters game. 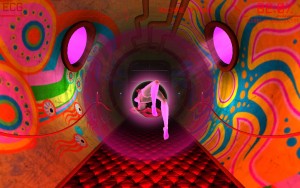 A couple of years ago, the creator of Deus Ex Machina (note the “Machina” bit – this has nothing to do with any cyberpunk first person shooters), Mel Croucher, Kickstarted a sequel. I gather it’s actually more of a re-realisation of the first game than a real sequel, using today’s technology to create what he imagined the game to be in the first place. Probably.

This week, it was cheap enough to be virtually free on Steam, and since I had credit gained from selling trading cards, it actually was free to me, so I bought it. I had no idea what I was in for. Having completed it in just over an hour, I’m still not entirely sure. 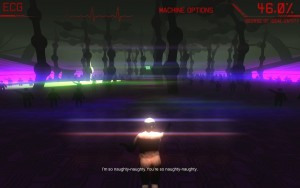 There are several chapters, each covering a different stage in a person’s life. Conception, birth, growing up, puberty, and so on until (and past) death. Christopher Lee poetically narrates the story, and each chapter has a fantastic and differently styled musical track to accompany it. Notably, Ian Dury provides lyrics and voice to some of these, despite having been dead for over a decade. I suspect his recordings from the original game were reused.

It’s the music and narration that make the game, as both are genuinely outstanding. Croucher’s clever verses make some great tracks, and the vocalists and musicians make music I’d happily buy on an album. Lee’s voice fits excellently as well. Unfortunately, the game doesn’t match up. 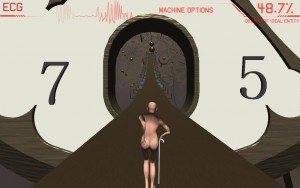 Of course, I say game when I really mean experience. Each chapter mainly involves your naked avatar walking, floating, and sometimes running, into the screen. You can vaguely direct either him or something else on the screen in order to collect or avoid various things (kisses on one level, medicine on another). As you do so, your “degree of ideal entity” score goes up or down apparently in tune to what you’ve collected or avoided, although it is not always obvious which way it will go. I suspect it doesn’t matter; mine was bumped up to almost 100% through a successful egg fertilisation, but dropped heavily when I chose the non-warmongering options in a later section. Who knows what difference it makes to the ending.

As I said, your avatar is usually only vaguely directable so your impact on his path and ultimately his score feels disconnected. It’s clear you’re going to complete the game any way you play, even if you chose not to control your man at all. It seems a bit pointless, but it’s so worth playing. Sorry, experiencing. That music.