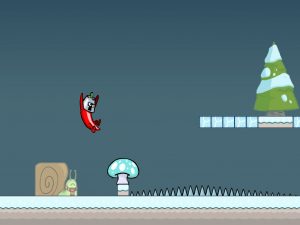 I had no idea what to expect when playing this, as I’d never heard of it before. In fact, I only own it at all because it came in a Humble Bundle I bought for other reasons. I have to say, it was a bit of a surprise.

First off, it appears to be an endless runner game, albeit with an end. Like Bit Trip Runner. Only with a running chilli. Thing is, you start at the end of the game, and beat the final boss on the first level, except it’s the final level. Princess rescued, credits roll. Then credits roll backwards. And so begins playing the entire game back to front.

It’s still a not-endless runner, but now you run backwards from right to left, unkilling baddies and catching projectiles you’ve thrown, all while avoiding coins you hadn’t collected and uncollecting those you had. It makes more sense when you play, probably.

It’s short, cheap, and not especially difficult, but I had fun with it while it lasted.