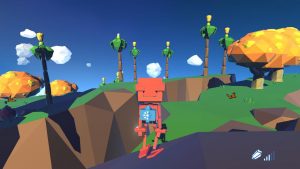 So many people were excited for this game, and voted it way ahead of two other potential PS+ titles this month as a result, but the majority of views of people after they’ve actually played it seem negative. Apparently, it’s “ruined” by screen tearing. It’s boring. The controls (specifically the climbing) are terrible, and so on.

I’d like to suggest, that those people are idiots. 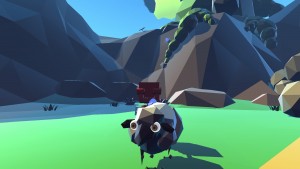 Yes, there is screen tearing. But I only noticed it when it was pointed out to me via a screenshot. I genuinely can’t see it when playing. The controls are awkward at first, but soon you find that L2 (left hand grab) and R2 (right arm grab) are intuitive, and by pushing up and alternating L2 and R2 you can climb quickly. As you progress, you unlock a jet pack, what amounts to a parachute, and finally a glider, and from then on, you climb less anyway. You don’t fall off the plant you’re growing so much, and the game becomes fun. 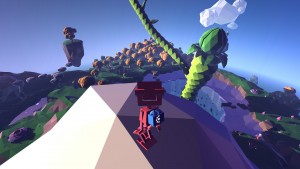 I found it fun anyway. Riding flower sprouts from the main giant star plant to glowing islands in the sky (the main task in the game) is fun. Grabbing objects just to see what they do is fun. Getting all the crystals is Crackdown-like, and fun. It’s all FUN.

The most fun, however, is grabbing a sheep, then dragging him into the sea. Always hilarious, especially watching his little sheepy face as you do it. Or, when two sheep are playing football with a pumpkin (no, really), you grab it, and chuck it in the sea. The sheep just look at you in disappointment. Leaves me in stitches. Being chased by a bull. MOM’s comments. Growing a giant phallus. It’s a great game, and those joyless inhumans who don’t think so are wrong.