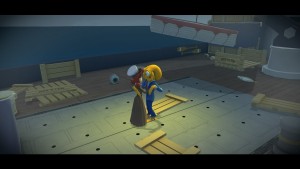 Firstly, I should point out that the lyrics to this game’s theme song have been wedged in my head for the last few days. Specifically “Octodad – nobody suspects a thing”. It’s so catchy.

As for the game, it’s frustrating, looks a lot like that original Xbox Leisure Suit Larry game in graphics quality and style, is impossible to control, had a terrible camera, and is awesome. You’re an octopus trying to live his life, implausibly with his family who are not octopi, as a human. You can’t speak, you can barely control your flailing tentacles, and – well – you look like a damn octopus. 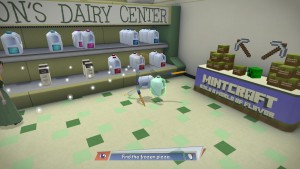 Your analogue triggers control moving the tentacles designated as your legs up and down, with R1 activating your hand-tentacle. The analogue sticks vaguely direct whichever fake limb you’re currently trying to control, and that’s pretty much your lot. Spill and flop your way around your house, try to make coffee with your flappy bits, clean up the garden, go shopping, and visit Octodad’s most hated of places – the aquarium. All while trying to be as human as possible else people begin to suspect you might be a cephalopod and not a slightly salty man after all. 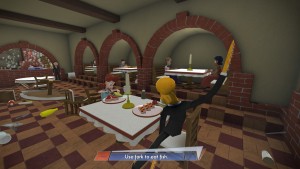 It’s a pretty short game, and aside from a bit near the end where you have to navigate on some planks of wood, it’s also pretty easy. It is a lot of fun, though, and throwing everything you can find all over the place never gets old. Not least in the bonus extra level where you and your wife go for a romantic meal and you can chuck the food, crockery and cutlery at the waiters.

Oh, and bonus marks for having toilets in the game. Any game with toilets in now gets an extra recommendation from me, and I’ve set up a Tumblr to record them.

Here’s a video of the final 40 minutes or so of the main story. Spoilers!