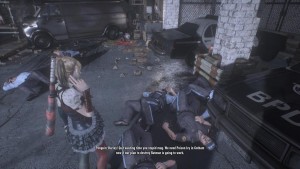 That’s a mouthful, innit? In fact, it almost takes longer to say the title of this post than it does to complete this story DLC for Batman: Arkham Knight.

You play as Harley Quinn, who is ordered by The Penguin to infiltrate Blüdhaven Police Department and rescue Poison Ivy. Why, isn’t clear: Penguin says it’s what Scarecrow wants. Since Ivy is instrumental in taking down Scarecrow in the main story (oh, spoilers, sorry) this doesn’t really make sense. Whatever.

Harley obviously has no Batsuit and her gadgets are limited to an exploding jack-in-the-box and a snare. The former is used twice to blow up walls like Batman’s gel, and the latter is completely unnecessary. She’s also got laughing gas that replaces the smoke bomb. And a baseball bat, for some eye-watering takedowns. 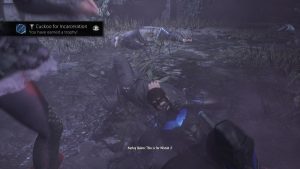 Unlike Batman’s quiet approach, picking off foes one at a time, Harley seems to make as much noise as possible. Thankfully, for her, the police officers she has to take down are idiots and don’t pose a threat. She can’t grapple to vantage points, but she can jump around like a cat, to much the same effect. All the while talking smack and sometimes chatting to her original “Harleen Quinzel” psyche, which still lurks within and tries to tell her to Do The Right Thing. She doesn’t.

Sadly, this schizophrenia is never explored enough because after a handful of fights, a few Predator-style rooms, and a Nightwing smackdown, that’s it. It’s the end. Half an hour is your lot. If I’d paid money for this, I’d be annoyed. It could have been so much more, but instead teases a new game mode and then ends. Bah.