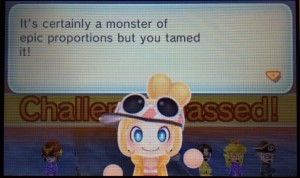 I’ve been on and off with StreetPass Fishing ever since it came out, usually forgetting to play until I realise I have 300 coins to spend, then splurge them all on anglers at once, then forget again until I’ve another 300.

Today, though, with my last batch of cats (those who chose dogs are idiots), I caught the final legendary fish, and won the game! Then it told me there were actually another three legendary fish they’d neglected to tell me about should I want to go for them too. I probably will, since I’ve nothing else to spend my play coins on now – all the Streetpass games are complete!