I have always maintained that 16bit Disney platformers (and, actually, most of the newer ones than that) are dire. Without exception. Yes, even Aladdin. Even World of Illusion. Even Quackshot. All of them. 8bit Disney platformers, however, are a different class. On both the Master System and NES, there’s a massive selection of quality Disney titles, and one of the best, is Castle of Illusion. 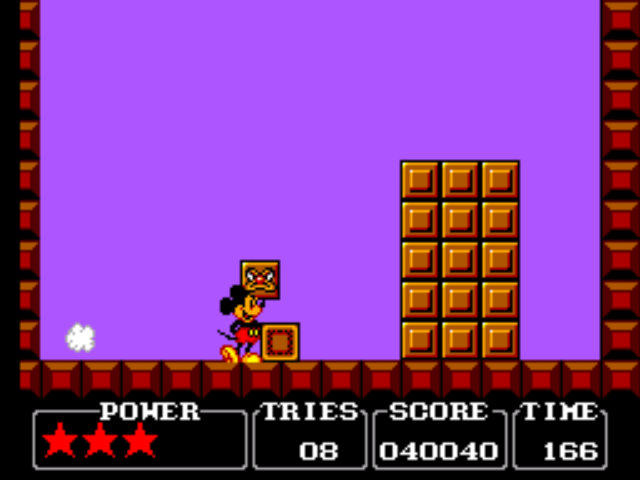 It tells the same story as the Mega Drive game with the same name, and broadly visits the same worlds as you try to save Minnie from the evil witch Mizrabel. The Master System version obviously looks cut down and isn’t as pretty as the 16bit version, but it plays so much better. The levels have more platforming to them, the carrying items mechanic adds a bit more to the game, and Mickey doesn’t throw apples for no reason at all.

Castle of Illusion is fun from start to finish, with some excellent bosses (I’d never noticed before how the chocolate boss rips off a classic Mega Man mid-boss before though!) and clever level design. There’s a bit in the clock tower level where you have to use the same key twice via two different routes which I thought particularly ingenious. It takes a slight shortcut hiding two of the seven necessary Rainbow Gems in the levels rather than have seven levels (therefore having just five), but that’s hardly a big complaint.

Land of Illusion next? I think so…