The best game in all creation is HYRULE WARRIORS for the Wii U. Probably. It came out of nowhere, wasn’t my sort of game in either respect – not a musou fan, and not a 3D Zelda game fan – and I bought it mainly because I had a funny five minutes when I saw it on the eShop. Somehow, it was fantastic, I’ve spent over 130 hours on it, and it just kept giving with the content. 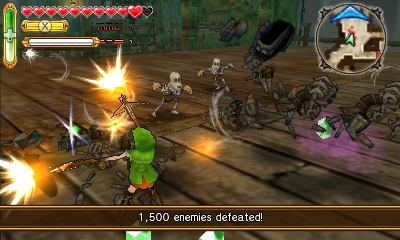 And now there’s a 3DS version, with all the content of the Wii U version (at least, it seems so) and then some more. Squeezed into a 3DS? Impossible. Or perhaps not so impossible when you hear about those poor folk with a normal Not-New 3DS who have stunted framerates and no 3D. Thankfully, mine isn’t one of them and so the game is astounding. A couple of slight control and camera niggles, but nothing terrible, and it’s just as much fun as it ever was. Only more so, because it has MORE! More characters (Linkle is incredible), weapons and modes. A new fairy raising feature. And the 3D shouldn’t be underestimated either – it looks and feels great.

I’m but a toe in so far, with just 3 or 4 hours on the clock, but I can see this running and running, just like the Wii U one.