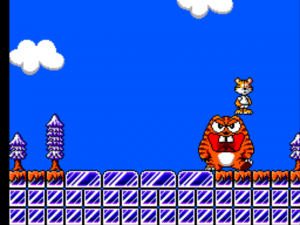 That said, because I’m awesome and somehow managed to remember the locations of two warps despite not having played the game in probably 20 years or more, I actually skipped all bar two of them – the tigery one and the end of game boss.

I’d also forgotten just how many lives there are to collect, finishing the game with more than twenty – and I didn’t even get any in the after level bonus game! One part of the final level actually has three lives in eggs right next to each other. It probably helped that I managed to take the highest routes in most of the levels as that’s where most of them lurk.

It surprised me how good the game still is after all this time. The jumping takes a while to get used to (you jump very high, but not very far at all unless you take a run-up) and you’re a bit skiddy, but apart from that and the very old school rule of the game not scrolling left, it was still excellent and holds up well.

I think I’d like to give Kid Kool on the NES a go next. It’s a very similar game by the same team, and I’ve never played it.