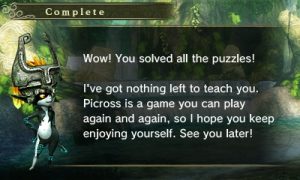 Gasp. No that really is the name of the game. It’s an eShop download that is available for free if you pick up enough Platinum points in Nintendo’s new “My Nintendo” service. If you jumped on Miitomo right away you should have enough by now so you’ve no reason not to get it. 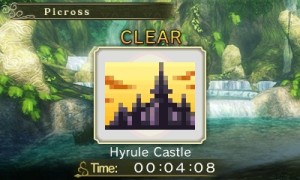 From the verbose game title, you should know what to expect. A Picross e game (it’s by Jupiter) only themed around Twilight Princess. There are 45 puzzles (repeated as Mega Picross puzzles, which is cheating a bit I suppose) and a pretty large Micross to solve in this package, which is roughly half the size of most Picross e titles in terms of content. Indeed, it took me just shy of 8 hours to complete everything.

Sure, it’s smaller, but it’s also free. And properly free as well, not like that Pokémon Picross nonsense from a while back – no game ruining IAPs here, thankfully – just lots of lovely Picross puzzles. 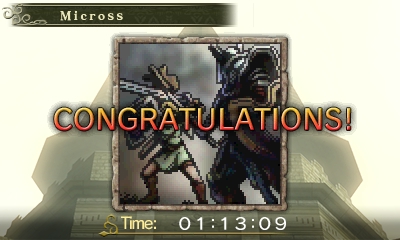