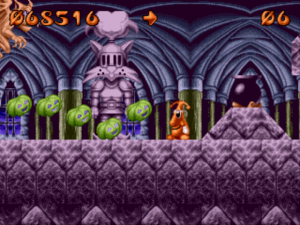 Puggsy was probably my most played, and certainly one of my most enjoyed, MegaCD games. It was huge, and had even more levels and bosses than the plain Mega Drive version, some of which made use of the MegaCD’s hardware with sprite manipulation and FMV.

I’ve been picking away at it over the last couple of weeks, finding it generally easier than it ever was back then, but struggling to find the secret or alternative exits in some of the levels so progress was less quick than you’d expect. Some I could remember, some I could remember but not how to do it, and some I had no recollection of at all – the final boss for instance was not the final boss and I’d totally forgotten about the real final boss. Even though I remembered the really annoying level with the spiky ball you can’t pick up, which comes after what I thought was the final boss. 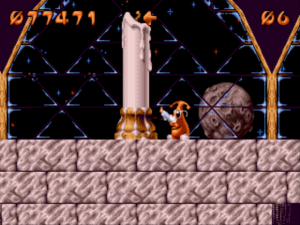 Anyway! It was a lot of fun to play again after such a long time, and I’ve completed about 45 of the 51 levels so may return to finish off the final few. There are some more secrets I’d like to re-see, like some of the bonus levels (I got the Jetpac one, but know I’m missing the Arkanoid one and at least one more) and the Wiz ‘n’ Liz reference. I found Galahad (aka Leander) in one level so that’s prompted me to add that game to the list of must-plays too.