Perhaps the weakest of the five new StreetPass games, and certainly the most preposterous. The plot in-game is some nonsense about defeating warlords by being naked, shot out of a cannon, and grabbing kites flown by your StreetPass chums en-route to landing on the baddies’ faces. 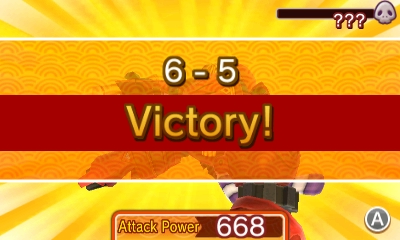 The game comes from lining the kites up so they match your trajectory, and the more you collect (and how accurately you do so), the more powerful your attack and defence are once you hit. Different levels mix things up by adding things like wind or clouds which make lining up the kites harder, but it remains very easy to progress and ultimately win. Like I did. 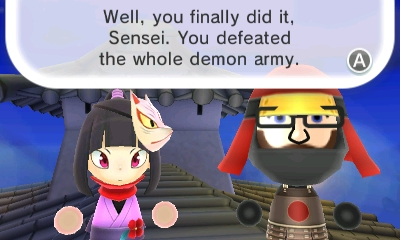 Completing it unlocks Hard Mode, which I don’t think I’m going to bother with. The other games so far have made me want to keep playing past the credits, but not StreetPass Ninja.