Having fiddled around with WinUAE (an Amiga emulator for Windows) a little this week, I realised that I probably still had a load of stuff I’d like to have another look at, and maybe archive properly, on my old Amiga 1200. It’s been stuck up in the attic, unused for the last 6 or 7 years, and I wasn’t sure it was even going to work.

The plan was to get the information off the hard drive using either a compact flash card and PCMCIA card reader, or, if that failed, by using a PCMCIA network card, Miami (an Amiga TCP/IP stack), my home network, and and FTP server on my Mac.

Sadly, the Amiga was dead. It powered up first time, but didn’t recognise the hard drive, instead booting to the “insert Workbench disk” screen. I powered it down, and then it wouldn’t even boot that far – I just got a grey screen. The power light was on, but that was it.

So, I dismantled it, cleaned out all the fluff, dust, hair, spiders and seeds (I have no idea) out of the innards, reseated my 030 expansion card, removed and re-fitted my ROM chips, and made sure the HD and FD connections were fine. After putting it back together – success! It booted into Workbench. Hurrah! 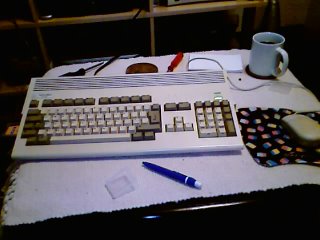 I then rummaged through my pile of old floppy disks looking for a 720K PC disk that I could use to transfer the required card reader software. I was actually transferring the files from Aminet using my MacBook, so using a PC disk when no PC was actually there seemed a bit perverse. Anyway, if you want to do the same thing, you’ll need a compact flash card, a 16-bit PCMCIA card reader, fat95 (to be able to read and write the fat16 filesystem), and cdf (to be able to mount it as a drive). I got these installed OK, switched off the Amiga, inserted my card reader (with card in), and… nothing. Grey screen, no booting. Again.

Cleaned everything out again, but nothing worked still. If I removed the card reader, all was fine. Insert it, and it wasn’t. Then I remembered something from many years ago – with some Amiga expansion cards fitted with more than 4MB of RAM, the PCMCIA port is disabled, as it’s mapped into the same address space as the RAM is. So, I took the 4/8MB jumper off the expansion, and all was well (albeit my free fast RAM dropped by half, but that didn’t really matter). I could read and write to my 64MB compact flash cards! 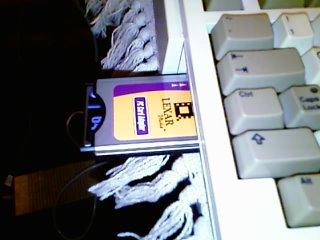 I then spent a merry couple of hours transferring the lot to my cards. My entire hard drive (which cost about £150 when I bought it) fitted onto two 64MB CF cards (costing £1.47 each). Amazing. 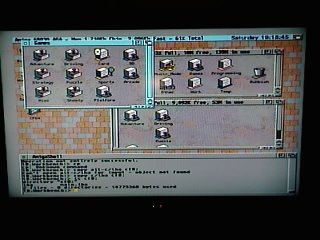 After that, I thought I’d spend a bit of time trying to get the network stuff working with my PCMCIA network card and a copy of Miami, but couldn’t get anywhere. I got the card drivers and everything, but I just couldn’t get it on the network. Ah well.