Unlike previous years, where I had a rule of not buying games if they cost more than a certain amount of money (£18, in 2011), in 2012 I followed the Pound-a-Mile Challenge – detailed here. This post is a roundup of where that money (and this year, miles) went.

How did the spending break down by platform? 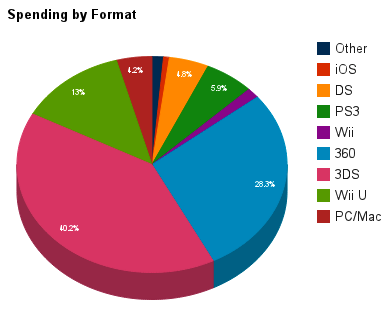 Note, however, that this chart doesn’t take account of hardware – whereas last year’s did. Really shouldn’t have included hardware in it last year. Hmm. If you take hardware into account, then the Wii U takes up almost half the pie.

Finally, the spend by medium: 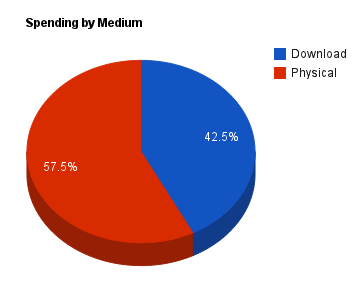 Downloads this last year mainly came in the form of the 3DS eShop and 360 XBLA. Some Wii U, PC/Mac and PS3 PSN stuff is included too, though. Interestingly, but expected, the share of downloads has increased. In 2010 it was 25%, in 2011 it was 34.9%, and this year it is 42.5%. A long time ago, I predicted this would be the case, and (slowly) things are moving that way. In fact, if I had a faster internet connection, no doubt that figure would be even higher – some games I don’t download simply because it would take weeks.

2 thoughts on “The 2012 Gaming Expenditure Horror”