Not mushroom in ‘ere. 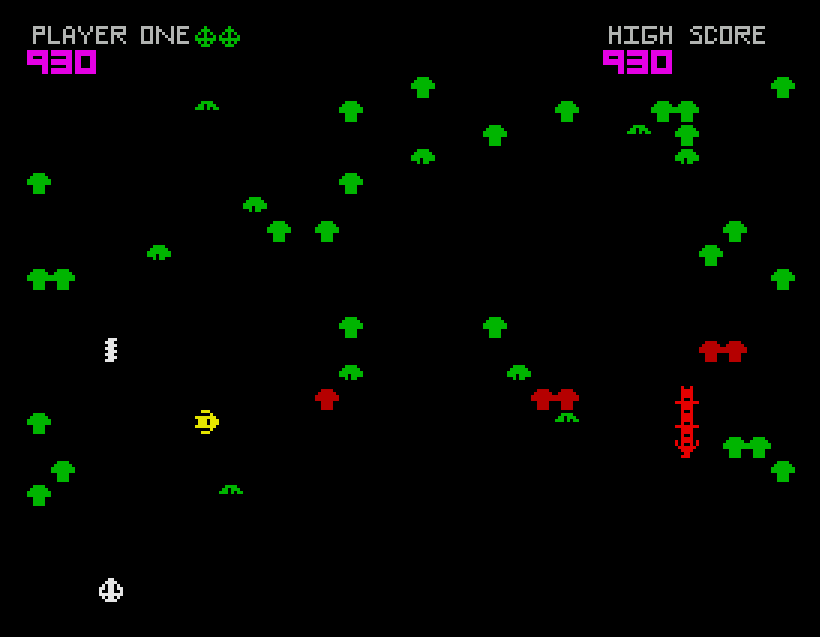 After presenting the wonder that is Tank Trax to you last week, Lorfarius mentioned he’d bought a Mastertronic collection, and I asked if he’d got Spectipede. He had!

Like many games I’ve written about before, Spectipede is another clone of an arcade game, but I knew the clone first. You’ve probably guessed that the game it shamelessly copies – as was the style at the time – is Centipede, cunningly using “Spect” in the name because it’s a Spectrum title. As with Tank Trax last week, Spectipede was released before Mastertronic got hold of it, but it received a much wider audience on the big M re-release.

I expect you’ve played Centipede before so know the basic idea: shoot the cen–er, Spectipede on its way down to the bottom of the screen. When you shoot a segment, it turns into a mushroom and the creature splits. If it hits a red mushroom, it immediately drops to the ground, so watch out!

Other bugs and things appear too, such as spiders and scorpions, but I’ll leave it for you to find out what they do!

Exciting bonus aside: As a kid, I’d use the size of the mushrooms in this game to describe how big a TV is. “Imagine playing it on a cinema screen!” I’d say, “They’d be 20 centimetres tall!”. I wonder how big they are on a 65″ LED TV? Hmm.

Controls: P to Play once you’ve chosen K for Keyboard, then:

Yeah, they’re the cursor keys on a Speccy keyboard, and a pain to use these days as a result. Still, it adds to the challenge, right?