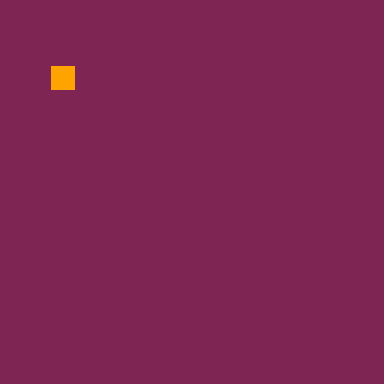 In the last chapter, I showed you the very basic task of putting a sprite on the screen. That’s all very well, but a bit less interactive than most games are. In this chapter, let’s make it move.

The first task here is to make PICO-8 check to see if the player is pressing any of the direction keys. You can do this by making use of the btn() function.

The arrow keys (or joypad d-pad, depending how you’re playing the game) are referred to by the numbers 0 to 3. The left key is 0, right is 1, up is 2 and down is 3. If you check to see, for example, if btn(0) is true, then you’re checking to see if the player is pressing left.

You’ll recall that the coordinates of the player sprite on the screen are stored in the variables x and y. To physically make the sprite move left, you need to make the value of x smaller, and to move it right you have to make it larger – remember that the left of the screen is 0, the right is 127. Let’s make it move by one pixel at a time for simplicity’s sake. Ignoring up and down for the moment, this code in the _update() function will do that:

In plain English, this reads as:

“If the left key is being pressed, then decrease the value of x by 1”

“If the right key is being pressed, then increase the value of x by 1”

You could be a little more verbose and use the longer forms if you wish:

When you do a check on a function, looking for a “true” is implied, and I prefer the shorter form of the increment and decrement command, but both work. Just note that when you assign a value to a variable you use one equals sign (=), but when you do an “if” check, you use two (==).

Of course, this only deals with left and right. Let’s add the code for up and down, using btn(2) and (3) and changing y as appropriate:

Now, you’d think that was the end of it, but there’s a flaw here. You may have noticed that the sprite can move off the screen where you can’t see it. That in itself isn’t necessarily a bad thing, but for the purposes of this game we don’t want that to happen.

To fix it, we need an additional check for “screen edge detection”. When moving left, we need to make sure that x is only decremented when x is already greater than 0. Similarly, we can only move up if y is greater than 0.

We can add this check at the same point we check for a button press by modifying the “if” statements. For example:

If we finish this off to include up and down, we can complete our code (for now!):

Next time, we’ll add an enemy to chase the player!