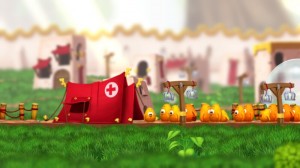 Aw! Lookit all the pweety birdies! I saved them all!

After getting stuck on just about every puzzle in the game, but managing to solve them all just before Miiverse stepped in to help, I finally reached the final special frog and “captured” it, sending it to the room with the giant evil heart, and the game was won!

Now, I expect there’s something to be gained by collecting all the little symbol things strewn across the map, dumping them into some device I found, and I’m still short some photos, but for now I’m done with the game. It was great, but I’m not sure I want to bother with the post-credits clean up. Especially with too many other games to do!