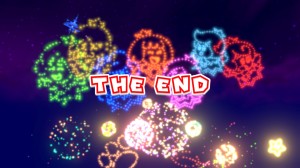 By completed, I of course mean I have beaten Bowser. Like New Super Mario Bros U, from around this time last year, that’s only the first half of the game. The post-game mop-up of stars, flags and stamps will continue for a long time, I’m sure.

Apparently, it took me just under 5 hours to get this far. That’s shorter than NSMBU by some way. It certainly felt shorter, and was certainly easier. Yes, I found a warp (by accident) which skipped most of World 4 (this is why there’s a fairy missing in that screenshot), and no, I’ve not done every single level, but then I didn’t do all of NSMBU before Bowser either.

Being easier was a surprise. NSMBU had some tricky levels, and a few really hard ones, but the vast majority of those were in the special post-game worlds. NSMBU was a very easy game, but getting to Bowser in 3D World was a complete walkover. There is just one slightly hard level en-route – Grumblump Inferno, near the end of the game – and that was much easier once I realised you’re supposed to walk on the blocks as they rotate (as the mice do) rather than jump.

I know that 100%ing the game will be much harder, but I’m still amazed as how easy this has been so far. It’s the easiest Mario game I’ve ever played, by a considerable margin.

But that doesn’t matter. It doesn’t matter because the game is fantastic. It oozes charm, quality and variety. Every level has something new, or a twist on something that came before. The graphics and the music are some of the best in any game ever, and the gameplay is nigh-on platforming perfection. But only nigh-on. Somewhere in the transition to 3D, the platforming precision of NSMBU has slightly veered away from perfect. The controls are not as tight. The into and out of screen jumping is a little vague in places (and some of the swimming levels are a little broken with this extra plane to deal with). These are very minor complaints, however, and it’s only because NSMBU was so recent that the comparison has to be made. 3D World is still a masterpiece, it’s just there’s another Wii U Mario game that stands a little taller.