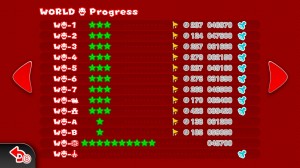 That picture there is all the flags, stars and stamps for all of the worlds from 1-8. Or 1-Bowser, if you’re using Nintendo’s eclectic numbering system. Surprisingly, although the hardest level up until then when playing normally and for the first run through, was Grumblump Inferno (the one with the blocks you have to stand on as they roll over lava), and I’d failed to get anything but a finish on it, this time I found it incredibly easy and breezed through getting everything. Time is such a healer.

Or, in the case of Mario games, time is a great provider of awesome Mario skills. With much play comes great power. Or something. 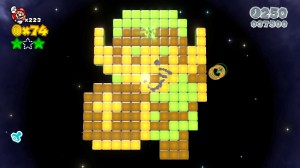 After that, it was onto the special worlds to clean up the remaining collectables there. I’m not far in yet, but no real difficulties yet. Aside from on Rainbow Run, where although I didn’t die, getting to the second star with a Fire Flower intact was a challenge. After several attempts (restarting if I lost it), I realised there was a Fire Flower just to the left of the area you need one for. Gah.