The post-game mop-up continues apace. I’ve played through all of Star, Mushroom and Flower worlds (although not collected everything in each level), finishing at Boss Blitz.

It’s not that the level is especially hard, because it isn’t. In fact, most of the bosses in this – which technically classifies as a SuckySuck(TM) Bit – are the same as earlier in the game. The main issue is beating them in the time allowed. Actually, the main issues is beating the Hisstocrats in a short enough time to fit everything else in, as all the other bosses are really easy.

It took about 30 attempts, but not 30 lives as I quit if the Hisstrocrats (the bosses I attempted first) fight was taking too long, but finally: 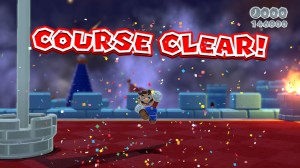 Then nothing. That was it. Surely not! Of course not. I “simply” hadn’t collected all the stars, stamps and gold flags in the rest of the game. Ooops.