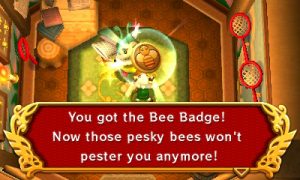 More not-actually-aimless wandering led to the accidental discovery of Turtle Rock, and the completion of it. The actual dungeon was very small, but involved several “layers” on each of the two floors and was actually quite complicated.

It was pretty easy though, brain-twisty puzzles aside, and the boss was easily seen off.

After that, I set about looking for entrances to other dungeons, finding my way to the Dark Palace (which had a rubbish stealth section before it – mercifully, it was easy and very short) and whatever the one in Lorule’s Lost Words equivalent is called. Triggering the weather vanes outside will make getting to each of these easier later on. While in those woods, I found a guy who wanted to sell me “a treasure” for 888 rupees. Since I have a billion rupees, I said yes – and he gave me a golden bee which I passed on to Bee Guy for a Bee Badge. Apparently, bees won’t pester me any more. Not that they ever did, mind.