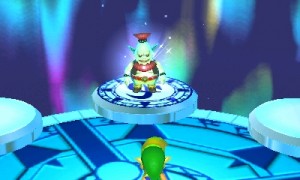 This is slow going. Not that slow going is a problem, and it’s actually mostly my “fault” as I keep getting sidetracked looking for treasure and stuff – only to be disappointed that I don’t have the Titan’s Mitt to pick up big rocks. Well, sorted that by getting the mitt from the Desert Palace. Now (I think!) I can reach everywhere, as I’ve all the weapons too.

But I’m ahead of myself. Before the Desert Palace (which, like in Link to the Past, was “split” into several sections inside and outside the dungeon – and in this game split across both Hyrule and Lorule) I completed the Ice Palace. It wasn’t hard, but was substantially harder than I was anticipating at this still-relatively-early stage in the game. Enemies were taking 4 or 5 hearts off with a single hit, so I had to be careful. Thankfully, there’s a supply of fairies in a central thoroughfare so I could frequently heal up without much trekking. Then I remembered – you can do dungeons in any order, so it stands to reason I might hit a hard one early, which is what I suspect I did. In addition to the enemies, the puzzles were a bit brain bendy too, so yeah.

After that, the Desert Palace was a complete walkover.  Even though I forgot I had the sand rod several times so temporarily struggled with the scarab things and buried chests. Old age, eh?