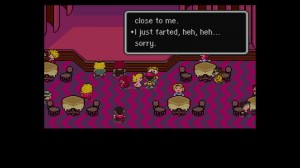 Even though I was all over this several months ago, I stopped playing. Not because I was bored with it, but I got stuck. I couldn’t get much further than the pencil bit – the enemies were just too hard, and I died $hlmun times.

But, with Backlog Fighter still in full effect, I returned to it a week or so ago and did that bit on my first go with no difficulty whatsoever. The game was back on. Woo! 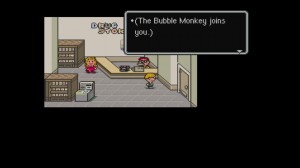 Across that area was Paula, who I needed to rescue. We then returned to Twoson where I was given $10,000, which I couldn’t spend on myself, so gave it to popular beat combo Runaway Five so they could be released from their contract and drive to Fourside, dropping me off in Threed on the way. Threed that was full of zombies. 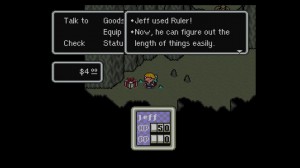 Zombies who caught me, and I had to take control of Jeff instead, who came to the rescue. With three members of my party, I took down the zombie menace (actually, I put some paper on the floor and they all stuck to it). Oh, and killed a sentient circus tent. No, really. 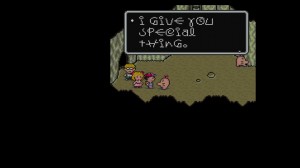 Now I’m on my way somewhere else, presumably Fourside via a non-direct route, and I’ve ended up in Saturn Valley. This place is populated with strange scrotum people who are all called Mr Saturn. And they speak in a very difficult to read font. And have telephones up ladders. And say Zoom a lot. I’m scared they might do… something… while I sleep.