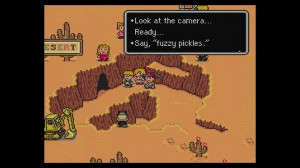 Progressing well through this now. Well, at least I was until I entered Moonside where everythings is… wrong. The map is like Fourside only upside down, and all in neon. And there are invisible walls. And some people you talk to warp you all over the place but not to anywhere useful. And “yes” and “no” are reversed, except when saving your game. It’s very odd.

Oh yeah, and Paula got kidnapped by a green squidalienghost in the department store, which means some of the fights now are pretty hard as I had been relying on her Freeze “magic” (although it isn’t called magic – what is it? PP? What?) a lot. 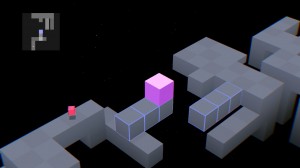 I still have some eShop credit and this was reduced last week to just £1.79 or something, so I picked it up. It’s a nice puzzle game where you roll a cube around picking up smaller cubes and hitting switches which make the platforms appear, move, or transform. Seems good so far, but I’m only about 20 (short) levels in. The controls are a bit of a pain though – it’s too easy to allow the cube to keep rolling even after you stop pressing the direction pad, which is odd as it’s a cube, not a ball. 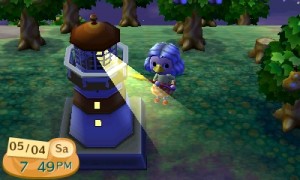 Still playing this every day! Big news this week though – I finally managed to get a lighthouse! That space I’ve been saving on the clifftop for almost EIGHT MONTHS has now been filled with a lovely shiny lighthouse. Awesome!

I’ve also been trying to get more special tree stumps. I’d visited someone else’s village and they had at least two special stump designs that I didn’t, so I chopped down half my trees in the hope I’d find them in my own village. I didn’t. So a lot of time has been spent planting new trees.

Late to the party with this, as Skylanders Swapforce has been out about six months now, but someone was selling Giants (and ten Skylanders we didn’t have) for a bargain price, so I snapped them up. I’ve been playing it with my daughter, and although we’re only about four levels in, and it does seems like more of the same (only without the right-stick “waggle” events to open chests and locks and things), it’s just as fun as the original. Having a pile of new Skylanders to try is nice too. We’ve 27 overall now. 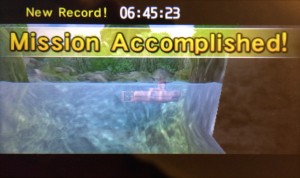 This was one of the “three for a tenner” games I bought a while back, along with Tetris 3DS and Heroes of Ruin. I can see why people complained at the price when it was £30, but for what I paid it’s a perfectly good title. You control a submarine and have to navigate through areas by moving depth and velocity sliders on the touch screen, rather than with the d-pad. Torpedo firing controls are all “buttons” on the touch screen too, as is the attitude “wheel”.

There are three different subs to choose, from a nimble but weak tiny one, to a strong but difficult to manoeuvre underwater tank. You actually have to play all of the levels with all three subs to unlock the later levels, and I’m currently struggling to pass Level 5, where there’s a massive ship you have to destroy, only I can’t. Boo! 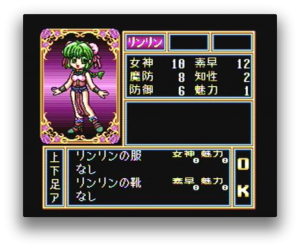 I have no idea what is happening. I intended to play this for Game Over, Yeah!! but couldn’t figure out what I was supposed to do, so didn’t get to any areas where it was possible to die, so had to abort it. It appears to be an RPG where you control a girl at a convent school (it’s full of nuns). I managed to find some other girls who were stuck in chests or surrounded by frogs, and then found a dressing room where I could strip to my bra and knickers (but it wouldn’t let me leave the room until I’d put my clothes back on). Pretty standard Japanese fare, then. See: