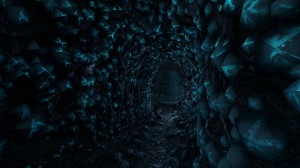 I’ve had this sat on my Mac’s hard drive for some time now, but being a non-console game it never crosses my mind to play it. Not least because connecting up a TV and a controller and so on… Today I had a couple of hours free and a game a couple of hours long was available, so Dear Esther came out.

First, I should point out this isn’t a game. I know there are people who would argue that it is, but it’s no more game than it is fish. It’s a story wrapped in a mostly linear walk around an island. A confusing, broken story relayed out of order in paragraphs both lucid and on the edge of insanity. Walking to various places triggers a section of plot, and eventually your wandering leads you to the radio mast you can see in the distance from the very start of the game. 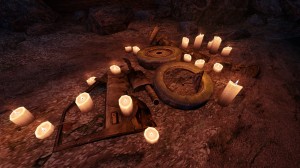 And there it ends. Along the way, if you’re lucky, your exploration will reveal a little about who you are, who Esther is, and why you’re on the island. Or it won’t, as these story snippets are apparently random.

I think I found enough to make a sense of the proceedings. Perhaps not the sense, but I can certainly make some organisation of the information my playthrough revealed. Er, not playthrough. As that implies a game. Which this isn’t. No, really – you do no game stuff. 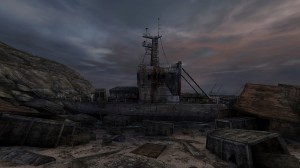 But was it good? I don’t know. I’m glad I experienced it (narrowly avoided saying played there), and it was pretty and clever, but I’m not sure how much more I got out of it via this medium rather than by just reading a short story. It didn’t help that you move so slowly, artificially extending the length of the notgame. It took me only about an hour and a half in total, and even though the vistas were nice and the cave drawings and chalk scrawlings added a little, I think I’d have preferred more wordy exposition in that time, or less time.