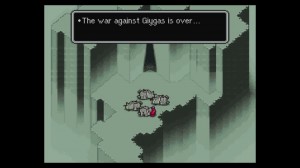 It took around 30 hours, and there was a break of about eight months between the first six and remaining 24 hours, but finally, Giygas has been defeated, Ness has saved the universe, and everything is perfect and wonderful again.

Which is lovely, and the game was utterly superb, but there’s a darkness there. Behind all the sunshine and happy box of Crayola, I realised that this Giygas wasn’t just the end of game boss. He wasn’t only the terror from the past set to destroy everyone and everything. There was something more. Spoilers follow. 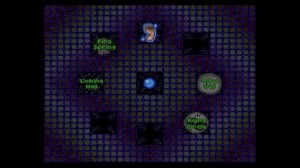 The main task in Earthbound is to reach eight “Your Sanctuary” locations across the game world. Most are at the end of some sort of dungeon, and can only be accessed by defeating a boss at the end of each dungeon. When entering each Sanctuary, as well as your party getting healed and having their PP fully restored, Ness records a sound from the Sanctuary with his sound stone. This triggers vague memories for him too, from when he was a young boy, a baby, and even before then. This is quite sweet, until you make the connection to Giygas that I did. 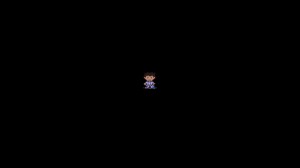 It is hinted multiple times that Giygas only exists because of Ness. In fact, it could well be interpreted that Giygas is Ness, or more likely, the evil part of his psyche manifest as a world destroying demon who lives in the past. From the Sanctuary memories, things that Pokey (who starts off as your bullying neighbour but ends up as Giygas’ powerful henchman) says, and the spoilers given to you when you drink the dodgy coffee provided by Mr Saturn and the little green thingies all reveal a little about how Giygas came to be. Ness’ mum says some pretty odd things too.

Then there’s the point where you reach Giygas itself. Some more exposition from Pokey, and your face appearing in Giygas’s “eye”. The way the final path to the end boss seems to be inside a living being.

This all points to one explanation, which I can scarcely believe I’m writing.

Ness’ mother is also Giygas’ mother, and Ness has travelled back in time to go inside his own mother’s womb to destroy Giygas.

It sounds horrific, and bonkers, but if you’ve played the game and paid attention, it all makes perfect sense. I’m less convinced about some of the specifics about exactly who or what Giygas is, whether Ness’ evil twin, a manifestation of his evil side as I’ve mentioned, or something else – Ness from another dimension, perhaps. It isn’t clear.

Pokey says something about how he was friends with Giygas, and in another conversation it is mentioned that even though Pokey bullied Ness, perhaps it was only so that Ness played with him. Perhaps this is why – because Giygas is the friend Ness could not, or would not be, but was still Ness in a way.

Even one of Giygas’ forms resembles a foetus. I told you it was dark. 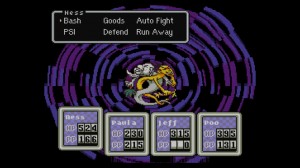 But that’s the story. “Just” the story, if you like. It’s not the game. 99% of the time spent playing it had little bearing on this dark side of things, and in a way that only makes the dark darker.  Thankfully, the rest was all very enjoyable. The fights were mostly fun and not frustrating. Unlike many JRPGs (which this is, no matter what your eyes tell you), especially those from this era, there’s no grinding. Defeating feeble enemies is done instantly without even entering a battle, and dungeons (not that most of them look like dungeons) aren’t huge complicated mazes where you need a pencil and a stolen school maths exercise book to get through as unscathed as possible. 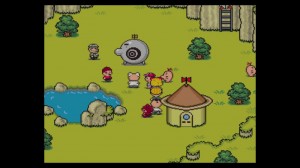 Everything is done to please the player, streamlining where possible (for example, you’re told who can use new weapons and armour, and if its better than the current kit, before you buy, and you can equip it when you purchase and instantly sell what it replaces), and introducing a teleport power that allows you to warp to pretty much anywhere in the entire world instead of tedious backtracking.

It was a pleasure to play from start to finish, but it was only a few hours after it has finished that I realised the real tale behind the game. If you’ve played it and come to the same, or different, realisation as I did, I’d love to know.