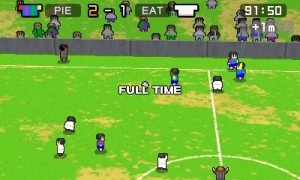 Those of you who know me are well aware of my level of love for football. The world’s most popular sport. The beautiful game. It’s all rubbish, innit. 22 overhairdressed pansies kicking a bit of pig around for 90 long minutes. Have you seen Robbie Savage? Good lord.

My forays into football games have been short and infrequent. I’ve booted a ball about variously over the years in PES and FIFA and so on, but nothing has ever held my attention since Sensible Soccer. And not even the XBLA remake – the original, on the Amiga, in the early 90s. 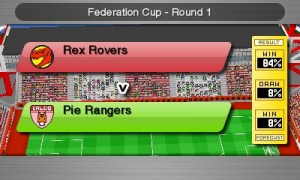 I did once get slightly addicted to a football manager game, which may or may not have been Football Manager (not the Kevin Toms seminal classic for the Spectrum), but that’s it. Until now.

Some months ago, perhaps years, Nintendo released shots of Calciobit. A 3DS update to a GBA game of the same name that I’d never heard of. It looked a lot like Sensible Soccer, but it appeared to be a management simulation. Interest pique++, but the chances of it ever appearing outside of Japan were slim to none, and so I was disappointed. Disappointed about a football game that might not come out in the UK. I’ve changed, man.

Then some astounding news – Nintendo were translating it and punting it onto the eShop as Nintendo Pocket Football Club. And I was there, virtually queuing up for a Day One purchase. That was about 10 days ago. I’ve sunk over 30 hours in already. Hooked. 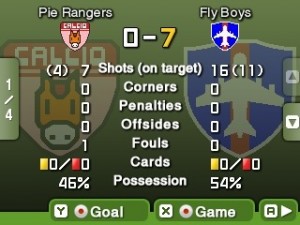 Things started out badly. My squad simply couldn’t play. I lost almost every game in the bottom league for the first half of the season and although I’d then figured out how best to obtain and use training cards (protip: play online lots) it was by then too late and I finished in 3rd place. My first, and only, Cup match ended with my pink boys (home strip is rainbow, away is pink, because reasons) suffering 7-0 loss which I couldn’t bear to watch after five minutes. Shambles.

Thankfully, my second season following an intensive summer of training couldn’t have been more different. Just five matches in and I’m top of the table with a 5 point buffer. The problem I have now, though, is I’m overworking my best players. I’ve had Jaimie – my star striker – injured twice already due to playing him hard, and I’ve been needing to introduce fallow weeks in the schedule to stave off player-death. Frustrating when all I want to do is train them and train them and train them.

Oh, and if you want to see my stats, click here.