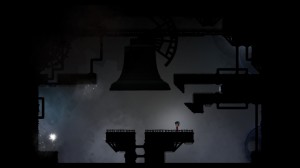 Chapter 3 is enormous. Like, really enormous. It contains the maps from chapters 1 and 2, and then about 50 times as much content again. And it isn’t just how many rooms there are, either – the puzzles and platforming sections are harder, so take longer. There are quests to get  items which have you travelling (not too far, usually, thankfully) round the map as you try to complete them. With enough of certain items, you can ring bells, but not until you’ve figured out how to reach them, and with five bells rung you can ring the final one.

And not once does it get dull, or repetitive, or frustrating. No matter how hard bits are, you don’t go back far when you die, and you instantly restart, so even the most difficult screens don’t cause anger. Actually, even the few I was really stuck on I found to be optional anyway, since there are more items than the bare minimum, and usually if you’re short you can supplement them with coins, which are found more frequently and are normally easier to collect – you just need more of them.

With the final bell rung, it was completed, with one of the most half-hearted (and purposefully so) endings I’ve ever seen. In fact, there it is in this very post. Basically, the narrator (who wrote the game) says that’s the end, and he’d off for a cup of tea. OK, so there’s a bit more after that, but not much that makes any sense. 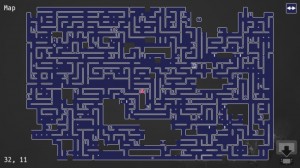 With it done, I found a bit on the title screen I hadn’t accessed (perhaps I couldn’t?) before, which was a short set of platforming challenges in the style of the intermission previously in the game. A couple of bits were pretty tricky, mainly involving those magnetic robots as you fling yourself from one to another trying not to crash into walls of death. I think that’s it now though.

A lovely little game, that well deserves some attention. The morals it tries to deal with and the story could have done with some work, perhaps something is lost in translation, or is too deep for me, but I didn’t really understand a lot of what was going on. I get the Myriadist/Internet divide is a religion/atheism thing, but much of the rest didn’t really work. Ignore all that though (and the terrible character art), and just enjoy a pleasant and involving platformer with some fantastic in-game artwork.