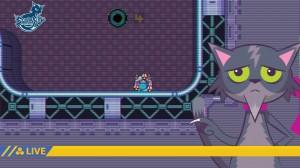 A very nice person out there sent me a copy of this for my birthday, which luckily I received just a couple of hours before I was going to buy it anyway. Phew, eh?

A few years ago, probably when I got my free subscription to PS+ for that Sony hacking thing that happened just as I got my PS3, I played a game called “The 2D Adventures of Rotating Octopus Character”. You were an octopus that stuck to platforms and rotated round the outside of them. It was billed (at least, that’s my recollection) as a “one button” game, with that button being “jump”, which let you (obviously) jump – onto other platforms that you then started to rotate around.

It was quite basic, but enjoyable. I had one major concern though – having the octopus only able to rotate one way made the game unnecessarily harder and slower. I even complained about this to the developer. To which he replied “then press the reverse direction button”. facepalm.jpg. 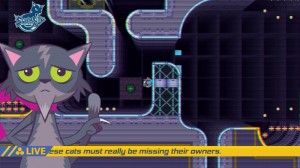 To be fair to me, the reviews (and, if I recall correctly, the PSN blurb) state it’s a one button game. At least, I think they did at the time. Which implies you only use one button. So why would I think there was a second button? Silly. Anyway, my PS+ sub ran out and with it the licence to play the game evaporated and that was that.

Until Scram Kitty came on the scene. From Dakko Dakko, the same developer as the aforementioned tentacle based title. Graphically, it’s totally different, and it certainly isn’t one (or even two) button controlled, but after playing it for a few minutes you realise that 2D Octopus is like a tech demo that had morphed into something really quite special.

You still stick to walls and rotate around them, and you still collect things (dots rather than baby octopii), but now you’ve free control over the direction (and speed) of both rotation and jump, you’ve got guns, and every platform has its own gravity so there’s some Mario Galaxy style physics shenanigans as you navigate through the levels. You’ve also got a sort of fiery spin double jump which can cut through certain enemies and objects, and increase your jump height and distance so you can reach other platforms and pass obstacles.

The aim is to rescue Scram Kitty of the title, who appears to be trapped in a TV show which he’s forced to present (on the TV as you play on the Wii Gamepad) – the show following you as you progress through the game to rescue him. Imagine The Running Man only as well as saving yourself, you also had to save Damon Killian. Sort of. It doesn’t have to make sense. 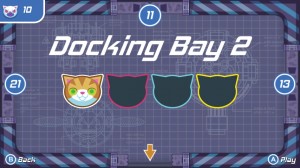 Along the way you rescue other kitties. Aside from the first few “tutorial” levels, there are four kitties in each stage. One is rescued simply by reaching the exit. Another by defeating a Mouse Commander (a stronger enemy than most of the Mouse Grunts) then reaching the exit, a third by collecting all 100 dots in a stage (and again, reaching the exit) and the fourth which is impossible.

Well, usually impossible. Once you find him, he moves to another location and you’ve a short amount of time to reach him. When you do, he moves on again. Like The Littlest Hobo. Fail to get to him in time, and you have to try again from his start point. “Frustrating” is a gross understatement.

The map screen gradually unlocks as your rescued kittycount increases. Numbered doors open as you reach the required number of saved cats, allowing access to new levels. It works in a similar way to Mario 64’s stars, where you don’t have to collect all the kitties to progress, but doing so allows access to levels sooner. 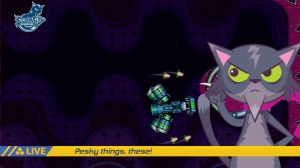 After the first few levels I realised that some of the additional kitty challenges were currently beyond me. Some of the “main” kitty challenges, which “just” require reaching the exit are tough as nails as it is, but the other ones? No. Actual. Way. Until I’ve had a lot more practice, at least.

In the sort-of centre of the map, there’s a room with Scram Kitty on it, and a 70 Kitty Requirement for it to open. I don’t currently know if I just need to get 70 kitties and can then do this level to win the game, or if there’s more afterwards, but I’ve only 32 kitties so far and there’s a lot of map that isn’t open yet, so I’m nowhere near any sort of end.

Except perhaps my end, as it’s so damn hard. I’m not normally a fan of incredibly difficult games, but somehow that doesn’t matter here.