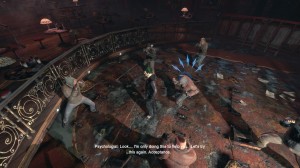 What’s this? Two Batman games completed in a single day? What are the chances?

Before today’s session I was actually pretty close to the end anyway, so it only took about half an hour to finish off. Well, over an hour if you count the ludicrously long credit sequence which listed every single person who has ever existed ever, and plenty of other people who never existed at all. Probably.

Anyway. The game! Was brilliant. Although it started off full of bugs, I actually found very few after the first few hours. Aside from this one, from not far from the end: 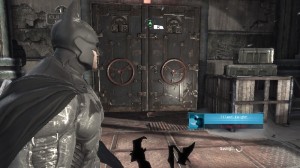 Yes! It really was! Despite the map being bigger, and that being one of the things I disliked about City over Asylum, for some reason I preferred it here. The combat was more or less the same as previously, and there weren’t many (or any?) new enemy types over the earlier games. I’m not really sure why I enjoyed it more than City, when I come to analyse it – I just know I did.

One thing that was definitely an improvement was in the boss fights. They were more varied, and some of them, such as the Firefly one, were really something new. The Electrocutioner was hilarious with his one punch kill, and Bane’s final fight was pretty awesome. 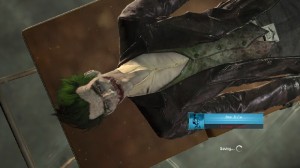 I also preferred the plot. I never got on with Arkham City’s “I’m dying and now you’re dying” Joker story, perhaps because although you really had all the time in the world to finish the game, there was this nagging sense of urgency as you needed to find the cure before you died. It was interesting to see the origins (that’s the name of the game, remember) of some of the characters, like Harley and Gordon, but laying the smackdown on a load of cops never really felt right, no matter how bent they appeared to be.

In order then, Arkham > Origins > City. Although I know many will disagree.

Onto Blackgate on the 3DS then.