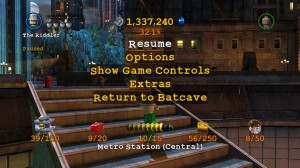 I actually started this over a year ago, but I don’t seem to have made any mention of it. What happened, was that I played the first three levels in co-op with my daughter, but because it didn’t support the Wii Classic Controller I had to use the Wii Remote which is terrible for this sort of game. I wasn’t enjoying it, so I intended to play something else for a while and come back to it to play solo or when I bought a Wii U Controller Pro. Other games happened, and it got put away. 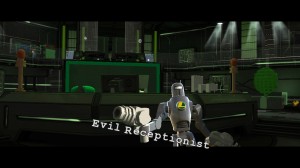 Then it came back out a few days ago, and, since I have a Wii U Controller Pro now, I thought two player was back on! Only it doesn’t support the Wii U Controller Pro. Player 2 is Remote and Nunchuk ONLY. Which is rubbish.
Thankfully, in this case, my daughter mainly just wanted to watch, so I flew through the game in single player while she was back-seat driver. 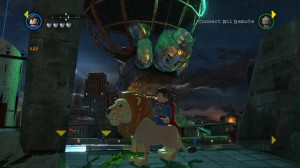 Like most Lego games, it’s a lot of fun. The voice acting is great, and the tasks and levels are suitably silly. The best bit, however, is the huge open world hub, which is even more impressive than Lego City Undercover, despite that game coming out later. Yes, Lego City is more fun and there’s more to do (and there’s traffic too), but Gotham is seemingly bigger and the loading sequences are virtually non-existent – especially in comparison. The music is lovely too, especially the Superman film theme triggering each time you take off as Superman. 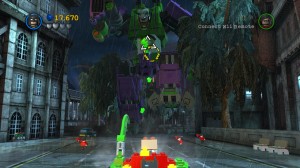 As always with these titles, completing the story is just the start. I’ve still almost 200 gold bricks left to find for a start, and haven’t managed a single full minikit yet. I have found most of the red bricks though, which should make collecting enough studs to buy every character and vehicle a bit easier. Not that they cost very much in Lego Batman 2, and I was surprised at how cheap the red bricks themselves were as well – 500k or so for the 8x multiplier? I’m sure that’s been 8 million or more in other games.