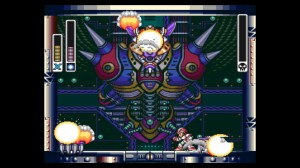 After I’d completed Earthbound, which was some time ago now, I realise, I asked about for suggestions for other great SNES games I may have missed. Mega Man X was recommended several times.

I was never a big fan of the series. In fact, I’d only properly played Mega Man 2 and one other (I don’t recall which) NES game, until the new-old Mega Man 9 and Mega Man 10 came out for the Wii a few years back. I enjoyed them quite a bit. 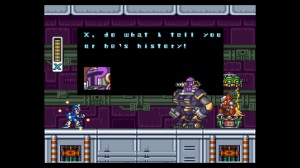 So this weekend, despite having a million other games to play already, I found myself wanting to download Mega Man X on the Wii U. I was going to play something on my 3DS instead, but my SD card has died (which is a story for another time), so that was out of action and… well. I’ve no excuse really. The deed was done and I set about playing it. Oh my is it hard.

Not as hard as Mega Man 9, though, I found. And, although the graphics have clearly improved over the NES games, and Mega Man is now X, so actually a different robot, it’s the same game as it ever was. 8 bosses to fight, in any order you choose, with each giving you a new weapon which will take down another boss with ease. Of course, you’ve no real way of knowing which weapon will bump off which boss quickly, so it’s down to luck over which order you try them. 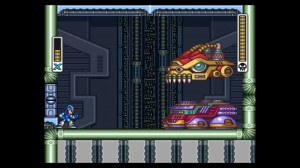 This actually meant the game mostly got easier as I played. The first few bosses I tried were very difficult, but most of the later ones I had a suitable weapon for. Not that having the best weapon was a guarantee for a quick kill, though – they were still pretty nails. The trick is to learn their patterns and strike only when you know it’s safe. Take your time – watch and listen. Most fights involved staying somewhere safe most of the time, with the odd safe attack to slowly (very, very slowly in some cases) whittle down their energy.

Before reaching any bosses, a level must be traversed but with very few exceptions these were pretty easy. Especially when compared to the boss robots at the end, anyway. 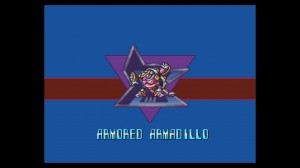 With all of the minions dispatched, it was on to Not Dr Wily (Sigma, I think he was called), bumping off all the previous bosses once more, as well as a few extra ones for good measure. Joy! It’s a SuckySuck(TM) Bit! No, not joy – the other thing. Despair! That’s the one.

Fortunately, the second time round these robots are a bit easier, mainly because you know how to defeat them, but also because you have the necessary sidearm to deal with them. Eventually, after doing all this, you reach Sigma. Having already thrown Irritating and Unnecessary Gaming Cliché #1 (the SuckySuck(TM) Bit) at you, Mega Man X then moves onto Irritating and Unnecessary Gaming Cliché #2 – where the boss is defeated but then somehow is resurrected immediately in a new form and has to be defeated again. Sigh. 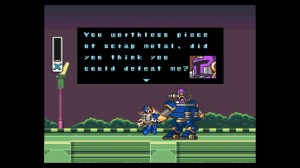 Which I did. In fact, Sigma was somewhat easier than most of the previous bosses, which was a surprise. And, regardless of Irritating and Unnecessary Gaming Clichés, the game was fun and rewarding. And hard. Very hard.

I will almost certainly be moving onto Mega Man X2 in the near future, but I’d best clear some other games out of my Pile of Shame first before adding any more to it.