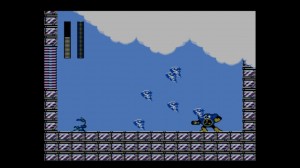 Is this 2 or II? The title screen says II, but everywhere seems to reference it as 2. Up until writing this, I’d thought the roman numeral numbering system for Mega Man games only applied to the NES ones, and the Game Boy games used standard decimals, but I don’t suppose it really matters. What does really matter? The game! 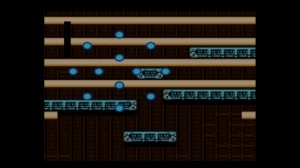 Which is just the same as the first one. Well, OK, that’s a slight lie. There are differences. First of all, there are eight robot bosses, not six. Secondly, the “Wily levels” are shown on a level map. You also have three additional tools – uselessly named “Item-1” to “Item-3” – which allow you to create various platforms. Finally, it’s a lot easier.

Apart from those relatively minor changes, Mega Man 2 plays more like a level pack for the first game than a sequel. I expect that’s how they’ll all end up. 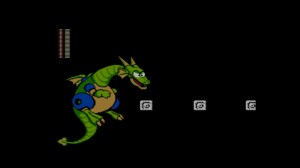 As I said, it was easier than the first game. The levels seemed a bit shorter, and the boss fights were certainly much less impossible (although I seemed to fluke a one-hit-kill on Air Man, somehow). Overall, though, the game was a lot longer with more Wily Levels and a full all-eight-robot-masters SuckySuck(TM) bit. I never like boss rushes. There was also the issue of the final few levels becoming impossible if you use up certain weapons, meaning you’d have to lose all your lives and continue should this happen. Thankfully, I’d been pre-warned, so stuck to the stock arm cannon as much as possible. 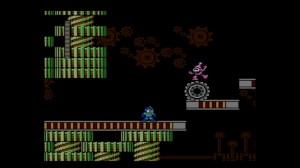 Oh, and another wrinkle in the game was the introduction of those nasty patterns of appearing and disappearing platforms. Luckily one of the items you can use (Item-2, I think – they’re not described at any point) lets you skip over the worst bits on Heat Man’s stage. Phew. Unfortunately, I know they’re also in Mega Man 9 so I expect they’re a series main-stay from this point on. 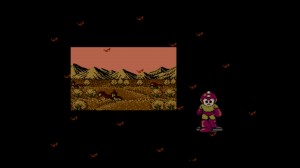 And the dragon that comes out of nowhere and forces an autoscroll section! And the massive horizontal laser bits! OK. Perhaps it wasn’t easier than the original game after all.

At least the final, final boss was really very easy. For a Mega Man game. Once I’d figured out that only one weapon could damage him, anyway. I sent him packing, and then… Mega Man 3? Yeah, I think so.