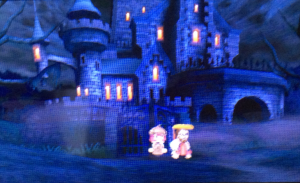 With my Windbag of Woe +2 almost maxed out (I got it to level 28 of 29), I didn’t see much point in pursuing more treasure chests. Not least because I can kill anything in a single hit and they can’t damage me more than 1HP (I have about 160) at a time. Assuming they manage to get a hit in. Which they rarely do.

As a result, I didn’t bother too much getting matching blocks, and just tore through floors 25 to 30, before meeting up with the boss and promptly dying. Not because he could do much damage, as even his flurry attack only dented me about 8HP, but because he can generate a mirror shield which does half the damage you do to him back to yourself. I didn’t realise this, hit him for 300HP, and that did me in. Oops.

My second attempt went much better, and I soon saw him off. I still had to use a health potion mid-fight as he used his shield again (but I didn’t hit him as hard that time), and that heralded the first and last time I’d used any items at all in the entire game. Yeah, it was a bit easy.