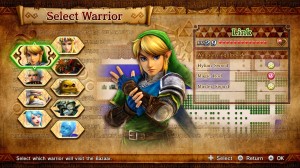 I hope my B, and to a slightly lesser extent, Y buttons are OK. In my twelve hours running through the main Legend Mode campaign, I’ve pressed them rather a lot. I don’t think they’re worn out, but not since I played one of those “shooting watch” games have I hit a button so many times. Mash mash mash mash mash.

BBY. BBBY. BBBBY. Other variations, peppered with ZR (bombs, usually) and the odd X to pull off a special attack or (rarely) A to dodge. And block? Blocking is for girls. In fact, I didn’t even realise there was a block until I’d nearly finished the game. Once more, “There’s a block button?” returns. Apparently, pressing R triggers your magic and makes you do fancier attacks for a bit. I used it once, I think. 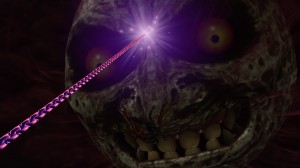 Sounds repetitive, doesn’t it? But it isn’t. Well, it is, obviously, but it never feels like you’re doing the same thing over and over. You keep being pulled away to rescue or defend elsewhere on the map, or you have to swap secondary weapon to deal with a different foe, or you might need to run away for a bit and find some hearts. Or escort a bombchu. Or take down a massive boss who requires more skill than random button bashing achieves. And sure, you revisit the same locations several times, but the situation is different. Sometimes you’re a different character (and they all perform differently), or you have new tasks, so it never feels like a rehash. 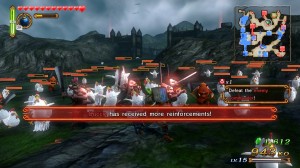 Importantly, it is a lot of fun. Swording/hammering/harping (really) your way through massive swathes of foes, knocking out 10, 20, 50 – even 100 – in one combo will never, ever get old or tiring.

Add to that the collection addiction where you collect weapons and materials that baddies drop to better your defences and attacks, adding new combo moves and perks, and even replaying missions isn’t a chore. 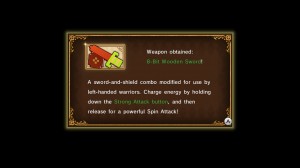 I did spend a little while on the NES Zelda-inspired Adventure mode, both between missions on the main mode and after completing the game, and it too is pretty fantastic. And huge. You’re given smaller missions where you have to defeat only certain enemies, take down a certain number in a time limit, and assorted other challenges, but there are loads of them. How well you do determines which areas of the map you open up too, so you need to perform well rather than just win if you want to open up everything.

Now I’ll work my way through that, while I wait for the DLC, all four pieces of which I’ve already pre-ordered…