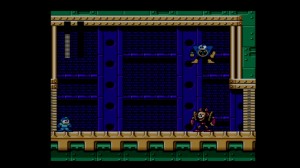 Three down, three to go. Well, NES Mega Man games, anyway. They just announced the SNES Mega Man 7 is in the pipeline for the Wii U Virtual Console, so it won’t be over so soon.

Mega Man 3 adds some new stuff to the series. The main thing, which had me stumped in a room until I realised, was you can now slide. This lets you squeeze under stuff, and is useful for avoiding certain attacks. The vaguely named items (1, 2 and 3) from Mega Man 2 have been replaced with the Rush devices – a dog who can be used as a spring, a moving platform, and a submarine, the latter of which is used for all of about twelve seconds in the entire game. 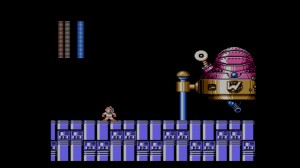 The game is also quite a lot longer than previous ones. There are still 8 Robot Masters, but once you beat them you have to replay remixed versions of four of their levels, complete with cloned robot masters from the older Mega Man games. The “Dr Wily stages” are next, and they’re longer too. That golum thing reappears too. 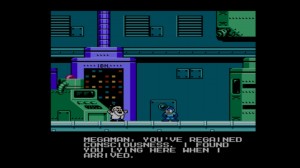 In general, it’s easier again than Mega Man 2, with the final boss being a complete walkover. I do wonder if the decline in difficulty is going to continue in the series?