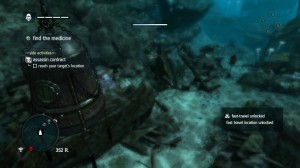 And with what seemed like a dash for the finish, the story blundered to a close. The second half of the game consisted mostly of actual assassinations, thankfully, but the boating was still there. Another rubbish element was introduced too – the diving bell missions which controlled horribly and you had to hide in seaweed from sharks. No, really. Rubbish. 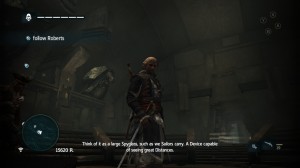 Luckily, there was just one of those, and the rest were optional. I optioned not to bother with any more. Very few of the side missions attracted me at all, truth be told, and there were too many small locations rather than a few large locations which meant item collecting was more travelling and less rooftop running, so I couldn’t be bothered with that either.

The “modern day” plot reveal was seen from a billion miles off. “John from IT” indeed. And NO ACTUAL WAY! Edward has a son called Haytham? SPOILERS! The Observatory was a little like the area Desmond and Co set up in during ACIII but more rubbish. And somehow someone I actually killed managed to survive his wounds? Despite being dead? Stupid. 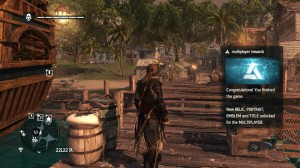 Having said all that, and as I mentioned before, the actual real proper Assassin’s Creed bits were pretty great. Overall, I enjoyed the game a lot more than III, but I hope Unity is more a return to earlier games in terms of missions and stuff. It certainly looks it. Not that I have a machine I can play it on. As for Rogue, which seems more of the same as shown in III and IV, I’m not convinced I want it. We’ll see.