You heard right. That there PS4 isn’t a typo. I now have an actual Playstation 4. I blame Fallout 4. Anyway, with new consoles come new powers to play different games, and so the first game I bought and played (and completed) is Episode 1 of Life is Strange, a game I could have bought and played on at least two other consoles I already owned. Um.

Life is Strange is, so far, superb. It’s a great story and an excellent premise – college student suddenly gains power to rewind time and predict the future, but still has to deal with everyday life and a variety of nice and not so nice characters. All while other bizarre happenings and conspiracies and shadiness and stuff happen around her. And she needs to pass her photography class.

With many conversations and actions having lasting repercussions, and the ability to rewind and change what you say and do in light of new information or just to see a different reaction, it plays out unlike any other game I’ve played for a long time. Sometimes what seems like the best option provides the worst immediate response, but who knows if that’ll work out for the best in the end?

Life is Strange is definitely strange, but it’s sucked me in already and I’m really looking forward to the outcome of all these choices. These choices, in fact (which may be a spoiler, so be careful): 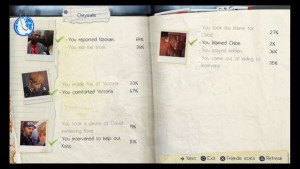 In my defence, I did at least try to hide in Chloe’s room. I just couldn’t find anywhere to do so!