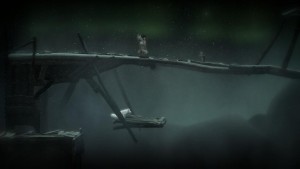 Well that was short. Apparently Never Alone is about three hours long, but I appear to have completed it in little over half that time.

Probably just as well, actually, as after the first 45 minutes of “ooh” and “ahh” over the graphics and the setting and how unusual it all appeared to be, Never Alone quickly became a tedious platformer with bugs and glitches and some rubbish jumps. Relying on the wind to carry you further frustrates as there’s no way of telling exactly how far it’ll take you, often carrying you past the platform you want to land one and into the sea/hole/baddie instead.

Restarts are quick, thankfully, but it’s seemingly random how far you go back. Sometimes it’s a mere couple of steps, other times (like during on of the chase sequences) it’s back 20 or more screens. 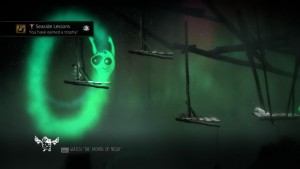 Often I found it difficult to tell where to go next, either because I’d not “activated” an invisible spirit with my fox chum, or not panned the camera round in a completely different direction to where I’d expect to go, or simply not realised what was solid ground to walk on and what wasn’t. Things were complicated later on when your fox becomes a boy (spoilers, sorry) and the whole way you play changes – for the worse, in my opinion.

Your bolas attack too is overly complicated. You have to hold back in the opposite direction to where you want to hit (which is fine), but then flick it in the direction you want to fling it. I now realise the PS4 stick isn’t ideal for this, and especially during the frantic sections of the game where you’re not given time for a second shot, I feel that just letting go of the stick, or pressing a face button, would have been a better idea.

I sound harsh and it isn’t really a terrible game, it’s just yet another one of those arty games which has a lovely story and fantastic graphical style, but forgets to do something a bit more interesting (and controllable) with the gameplay. As it is, it’s just another slightly annoying platformer.

Anyway, here’s the last hour or so. Spoilers, of course.