I think this might be in my top three most played 3DS games now, and I’ve not even touched the Mario themed option. I got stuck on a boss, then powered through a few more levels, then got stuck on the previous boss again when she cropped up later with another monster at her side. Too hard. I’ve been trying lots of dragon combinations and came close once to besting them, but then one of the two baddies almost completely healed both of them and that was it. Maybe some grinding is in order. Or some different dragons again.

Lego The Hobbit (Wii U)

We completed it, but since then we’ve been mopping up stuff. It’s pretty slow going though, and we haven’t even revisited any of the levels yet. Daddy Pig seems to voice half the characters in this, which is slightly absurd. Especially the blacksmith’s wife. With her beard. Hmm.

A not very good puzzle game. I got bored before the demo even finished, to be honest.

There’s a game called Witch & Hero on the 3DS which is the most ridiculous concept ever. You walk into baddies to kill them, but when you do, you take damage – meaning you’re inevitably going to die. It was rubbish.

Fairune seems to be by the same people and has the same mechanic, only instead of protecting a static character on a single screen, it’s a flip-screen RPG of sorts. And somehow, I’ve gotten a bit hooked on it. I’ve finished the demo and now will almost certainly buy the full game. This surprised me.

Everyone loves Chibi-Robo, right? And taking pictures of real things to include in the game and collecting junk just to tidy up because he’s a cute robot that does that? Awesome, right? Then why is this a slightly crap platformer instead of any of that? How disappointing.

Well, I tried to play it. But it said no. I was in some sort of lobby and there were a couple of people to talk to and I found if I ran into a wall a ball fell from the sky and I could play keepy-uppies with it for a while but then that was it. I assume I needed some friends online to play with. 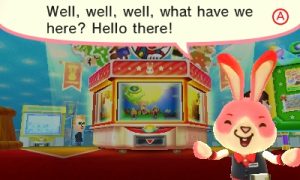 No way am I giving money to this, but so far, I’ve not needed to. I’ve done well enough in the practise crane games to rack up a few free plays, and so far I’ve bagged about 12 badges. Not that I can use the badges because I’ve barely any space left on my home screen. I was hoping it would expand again, as it does when you hit about 80% full, but not this time. Boo.