Crawl out through the Fallout back to me! Oh yes. Fallout is BACK and I’ve bloody loved it. Fallout 3 and New Vegas were two of my favourite games from the last generation of consoles, and two of the most played. As soon as Fallout 4 was announced, I bought a PS4 so I’d have something to play it on. I was so excited I posted about it on Twitter every single day from announcement to release. Oh god, Fallout 4. 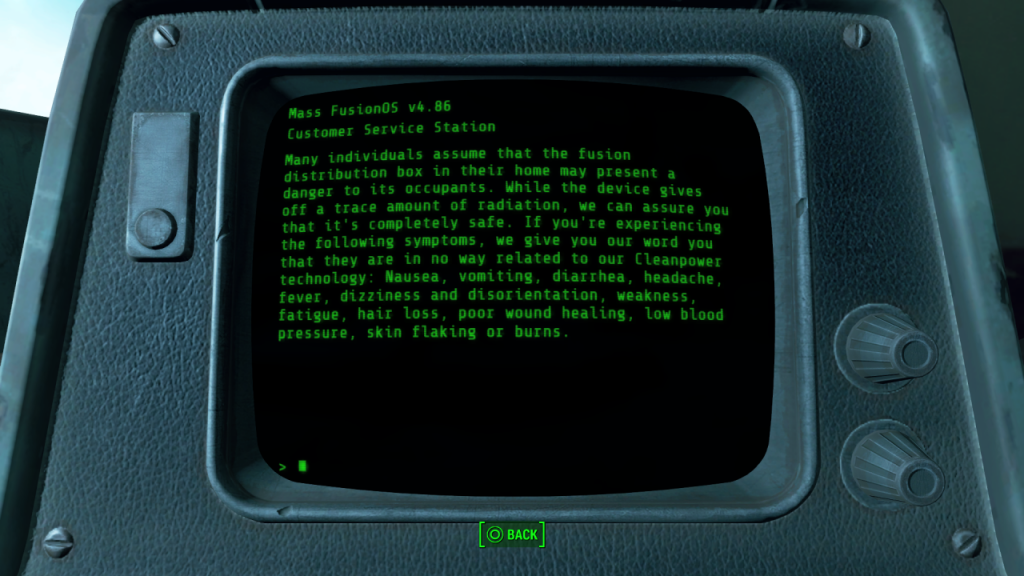 But first, some bad stuff. And spoilers – definitely read no further if you don’t want spoilers. Stopped reading? Excellent.

I didn’t like the ending. I know there are several endings, and I’ve some earlier saves ready to return to when I decide to try for the others, but I felt that the Railroad ending was looking like the “good” ending. It wasn’t. Not unless you think slaughtering dozens of innocent scientists and destroying 200 years of scientific progress (not to mention re-radiating a large chunk of the Wasteland) in order to save the “lives” of some synthetic humans is a “good” ending. Here’s a video, spoilers abound:

What I wanted, really, was for the Institute to see sense and either hide away completely (they supposedly could with their reactor) or share their advances with everyone for the good of the world. But no, that doesn’t seem to be an option.

That aside, the game itself is excellent. I’ve posted about the bugs, of which there are a lot, but they’re mostly minor. Two major ones happened (the next quest didn’t trigger), but they resolved themselves eventually after doing some sidequests for a while. There’s some annoyance with the dialogue choices, as the options on screen just give you an idea of what you’ll say rather then the exact words and intonation meaning you can end up with a totally different conversation to that you expected. These make up a small part of the game though, and the rest more than makes up for it.

I love the setting. I love the exploration. I love the 40s, 50s and 60s songs on the radio. I love the characters, especially Nick Valentine who, since meeting him about 12 hours in, has become my only companion. He’s awesome:

He has great one-liners, keeps me on the straight and narrow (he’s not a fan of stealing or being nasty to folk) and looks fantastic with his private dick outfit and half his face torn off. One day I’ll actually go and find Eddies tape for him. One day, Nick. One day.

I even love the base building, which is new to Fallout 4. It’s clunky, it’s buggy, and is a completely pointless time-sink, but for some reason I keep getting addicted to it. I’ve built towers and castles in the sky and a warehouse full of beds with a disco ball, and it’s incredible.

Besides that though, and the massively improved graphics (and palette – there are blue skies now!), it’s all still pretty much Fallout 3 again, in a new location with new things to do. In a way, you’d think that’s a little disappointing, but it’s actually exactly what I wanted. There are tweaks to improve things, like being able to tag required parts so junk items show up as needed when looting, and being able to see and take what is in a container without “opening” it, but they just improve the experience rather than vastly change it.

I just wish there was a better ending. Maybe one of the others will surprise me. Or maybe I missed some dialogue options somewhere. I’m sure I’ll find out, as I’m going to play some more. A lot more. After all, I’ve only put 65 hours into it so far, so I’ve barely scratched the surface.