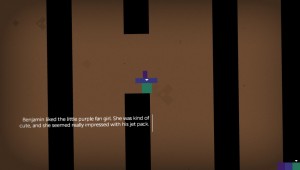 It has to be said that there were two things harder than the actual game itself, but related to the game itself. Number one: actually getting the damn game to load. I had to download the Benji DLC again, restart the Vita, and sacrifice several virgin goats just to get as far as the menu screen. Number two: actually figuring out how to play the DLC. Turns out you have to choose to replay a scenario and then pick Episode 10. Which isn’t listed as Benji DLC. Ho hum. 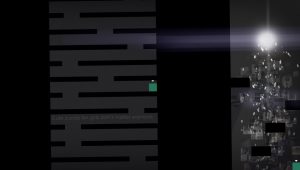 Once in the game, it’s short and sweet with an abrupt ending that made me think I was missing some more levels. Not that it really matters.

Benjamin adds a jetpack ability, making his levels a bit faster and floaty than in the main game. It also seemed to make things a lot easier, and I rattled through the lot in just over half an hour. Not including problems with getting the game loaded and restarting from two crashes. Anyway, it was worth the 60p or whatever it was I paid.