The aesthetic of Broforce really appealed to me, with all its pixelly loveliness and explosions and stuff. Apart from having lots of things to shoot and almost completely destructible levels, and of course having a pile of action hero parody characters, that was about as much as I knew. I was going to happily pay money for it on PSN and then they made it a free PS+ rental. Bargain.

The first few levels were more or less what I was expecting. Overly patriotic soldiers dropped into various levels full of terrorists, rescuing other patriot soldiers as you shoot your way through to the end. And this was great. Then, it slowly became less about shooting and started requiring some thought. Traps meant you couldn’t just rush in. Some enemies needed taking out in specific ways. If you blow up some areas it causes the roof to collapse in, and so on. Sure, there was still a lot of shooting, but it was changing.

After a while, other enemies started appearing which changed things again. Not least the aliens later on in the game, which – like in the film – bleed acid which eats away at the levels (and you). Later still, the undead start attacking and eventually demons and all sorts are added to the mix. I think what I’m saying, is that the game is constantly changing and you have to adapt your methods a bit as you progress.

That said, it always remains mostly a platform shooter, and a very good one at that, but the main game mechanic causes problems. You see, every time you die, or rescue a Bro, your character changes to a randomly unlocked Bro. They all have similar running and jumping abilities (with a few differences), but they have wildly different weapon sets. Some have long range guns, some short. Some fire rapidly, some have a blast range, others have kickback. MacBrover only has TNT and no actual gun, making him tricky to use for much of the game (but incredibly useful in some circumstances), and Mr Anderbro has no weapons but his (very powerful) fists. What this means is that two Bros in the same situation won’t be usable in the same way, and some of the bosses in particular are virtual impossible with certain Bros. Which would be fine, but you can never choose which Bro you’re going to be!

Thankfully, levels are short and many have a mid-way restart point in case you does completely. If one Bro fails you, next time you might get someone more suitable. You rarely end up frustrated as a result. 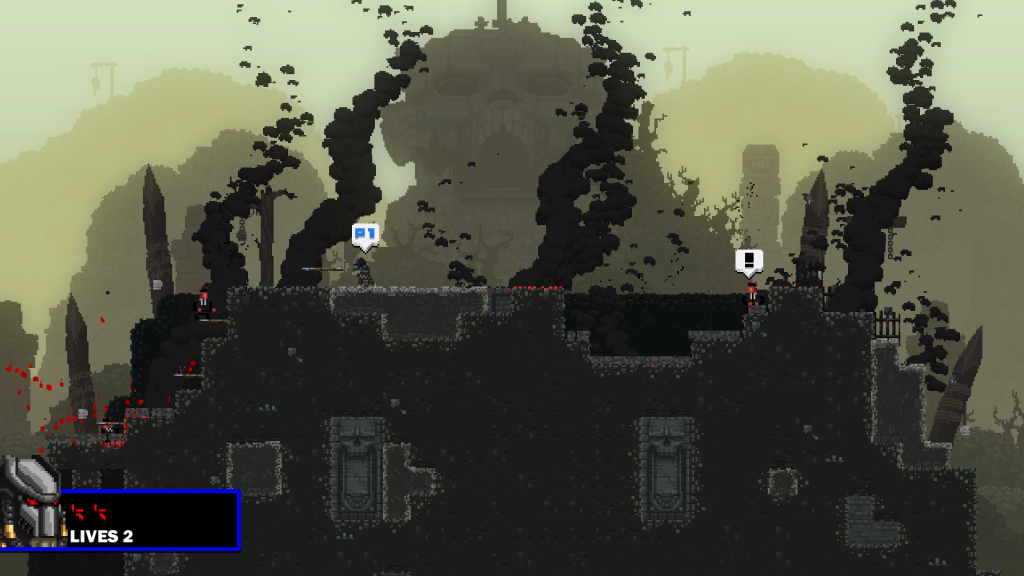 At least not with regards to Bro selection, anyway. Bugs, on the other hand, were almost game killers. Before a recent patch, there was a particularly nasty one where about a second into each level, your Bro stopped responding to inputs for around another second. This made at least two levels virtually impossible, as you needed to react immediately – and couldn’t. After two or three patches this bug was eventually removed, instead being replaced with a new one where between levels and sometimes between restarts (which used to be instant) the game appears to hang on a black screen, sometimes for over a minute. This new bug isn’t game-breaking like the previous one, but it does annoy, especially if you have to wait ages between restarts on a difficult mission.

There are also performance issues, in particular when the screen is busy with lots of enemies and explosions, meaning some levels play out almost entirely in slow motion, the final boss in particular. It didn’t bother me too much, but you’d think a PS4 would be able to handle a 2D platformer a little better.

The final few levels provided another annoyance. All of the other missions are made up of about 5 levels each, after which you get a boss, and then return to the map screen. The last mission, however, seemed to have three times as many with no way to save the game. As a result, the last 90 minutes of the game needed to be played in one single sitting. If I’d have known, I’d have done it another time rather than have to stay up late just so I didn’t have to play it all again. The final boss also suffered from Irritating and Unnecessary Gaming Cliché #3 – having to kill him over and over in various forms until he was finally dead.

From what I’ve written you may think I’m being largely negative about Broforce, but in fact I really enjoyed it. It has faults and isn’t perfect, but I still love the style and the gameplay and with hindsight I certainly would have bought it. I certainly suggest you do.