Warning: here be Bioshock Infinite spoilers. Read not further if you wish to remain in the dark about the plot and ting.

Those OK with spoilers, proceed. 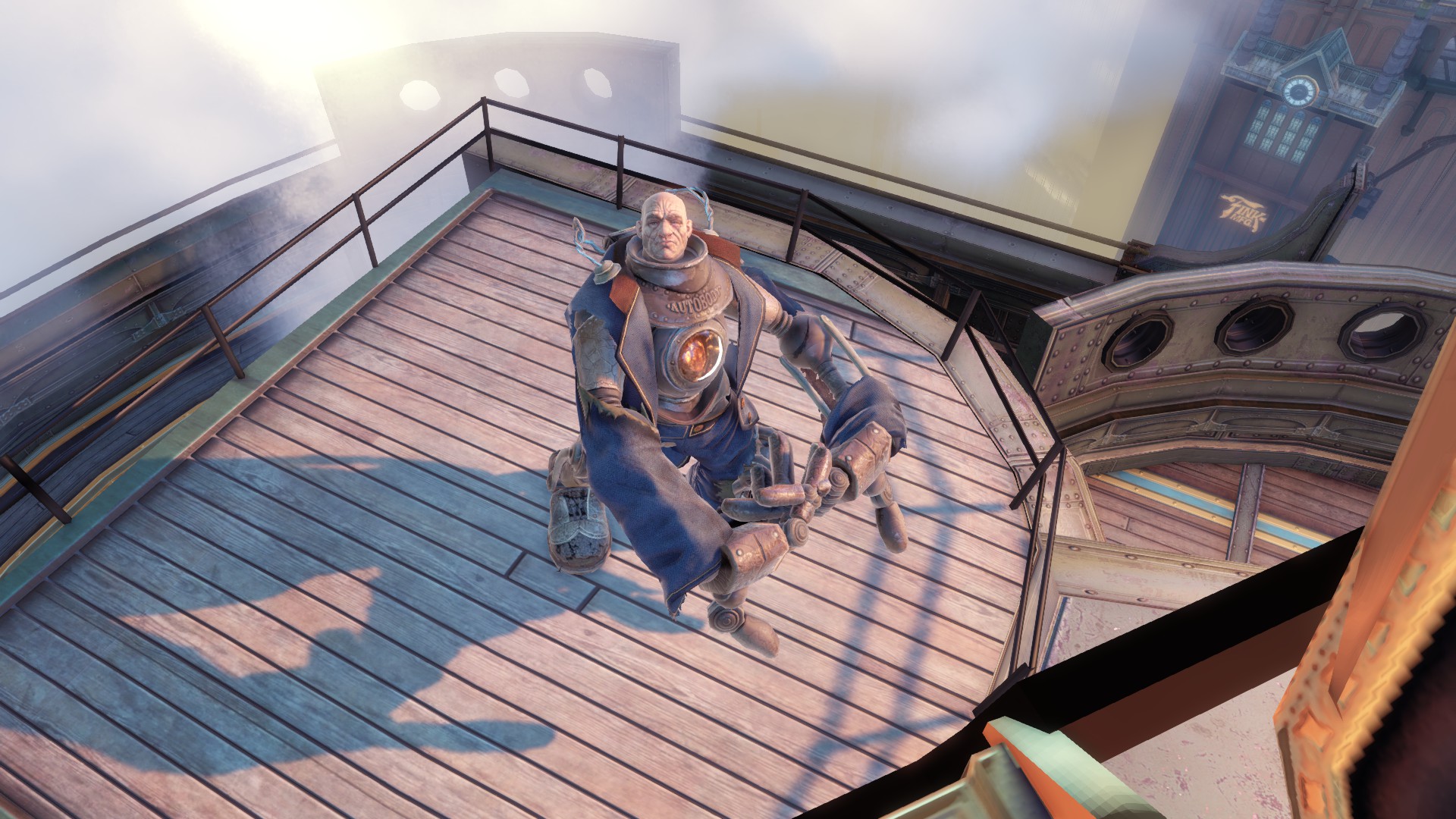 Remember in the first Bioshock game when that “Would You Kindly” reveal made you go woahhhhh? Bioshock Infinite doesn’t have that. Not to the same degree, anyway. Part of the reason is that the backstory and twists, if you could call them that, are drip-fed to you in mainly in the form of audiologs supplemented by the odd happenings regarding tears you come across and some seemingly out of place dialogue here and there.

The first suggestions that things aren’t what they seem come about in the form of music, where a barber shop quartet stops by to sing some Beach Boys, and a brass band strike up with an instrumental version of Girls Just Wanna Have Fun. Not in keeping with the 1912 setting. Coupled with Elizabeth’s ability to open tears – one of which shows Paris in the 1980s – it becomes obvious some sort of time and/or dimension jumping occurs and technology (like many of the guns) and music are pulled through. 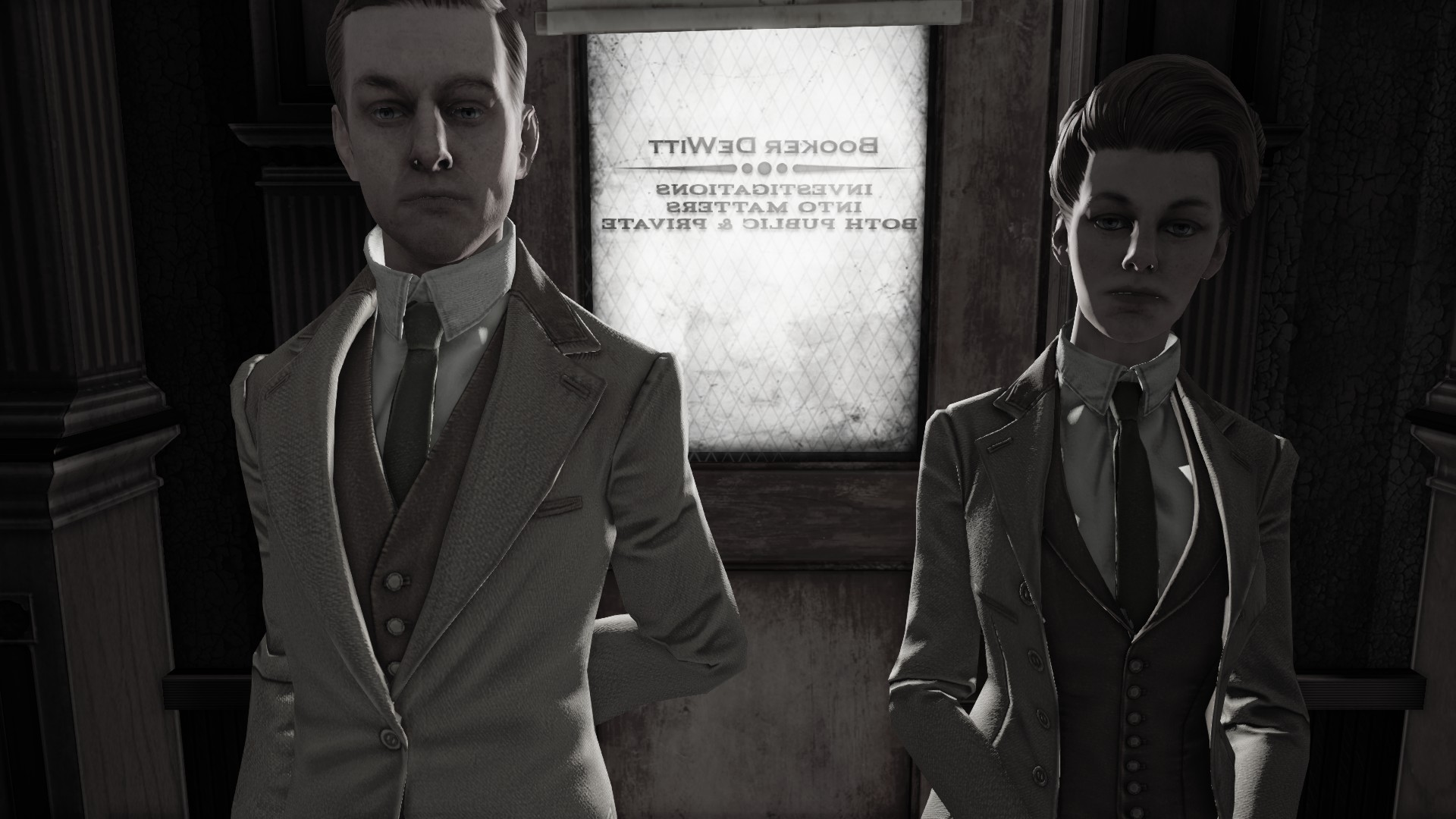 Later, you jump to alternate realities yourself, with Elizabeth’s help. With exposition from the “twin” Lutece scientists the game essentially becomes an series of episodes of Sliders.

So what I have pieced together, is this: DeWitt has a baby daughter, which he gives up to pay off his debts. He forgets about this, however, although part of him remembers her – Anna – died, or was lost, or something. The baby is given to Comstock, who is the “prophet” who creates the flying city of Columbia, and grows up to become Elizabeth, the daughter of the prophet. 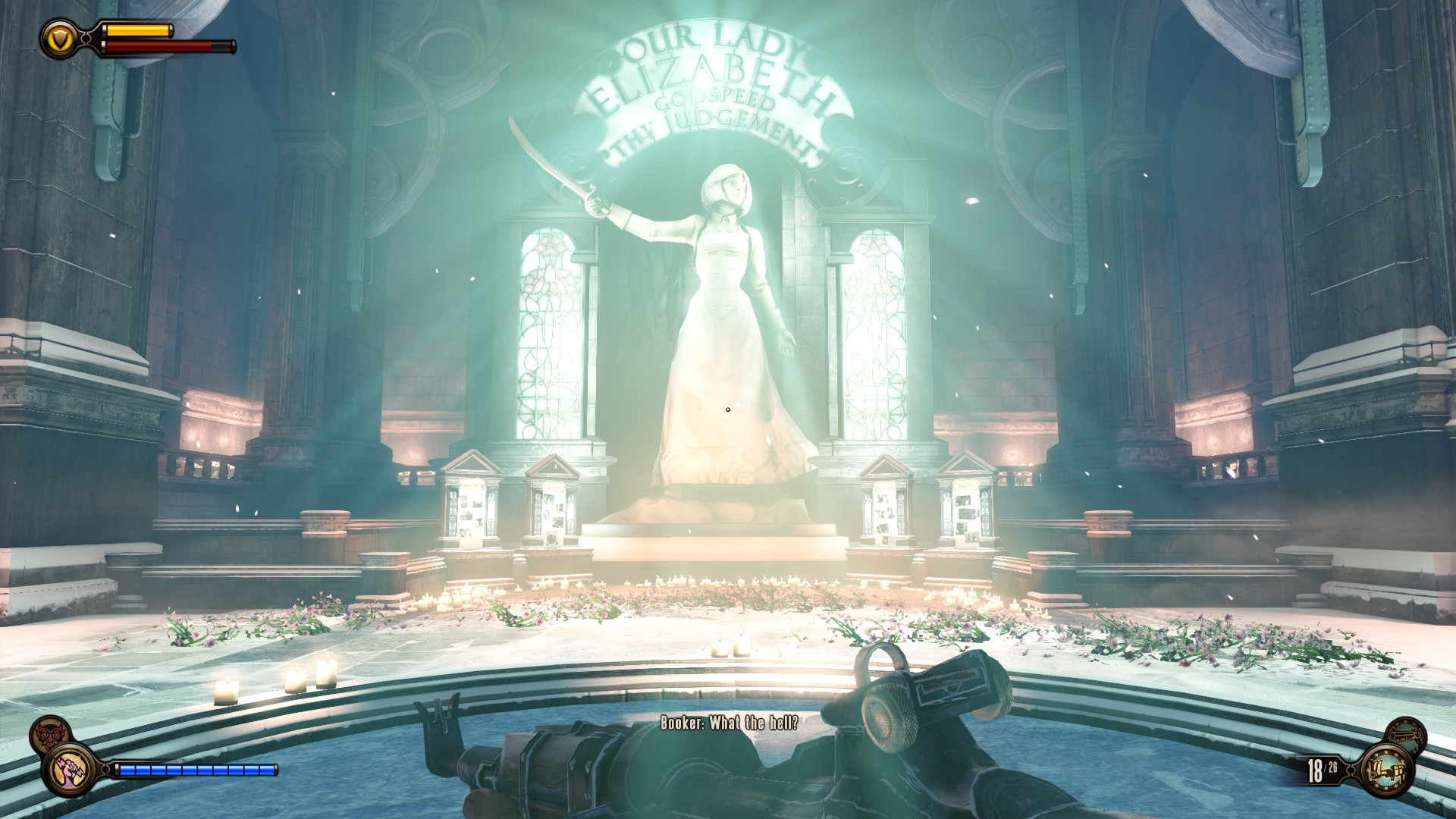 Now, other places no doubt have a full breakdown of everything, but ultimately (in my ending, anyway), it is revealed that DeWitt is Comstock. Rosalind Lutece and her other-reality “brother” Robert have made Anna/Elizabeth into a conduit between realities, and they are able to travel freely between realities to further their aims. The city flies based on one of their experiments too: An audiolog from Rosalind says she made an atom levitate, and if not an atom, why not something bigger – like a city. In fact, it doesn’t levitate. It just doesn’t fall. Erm. 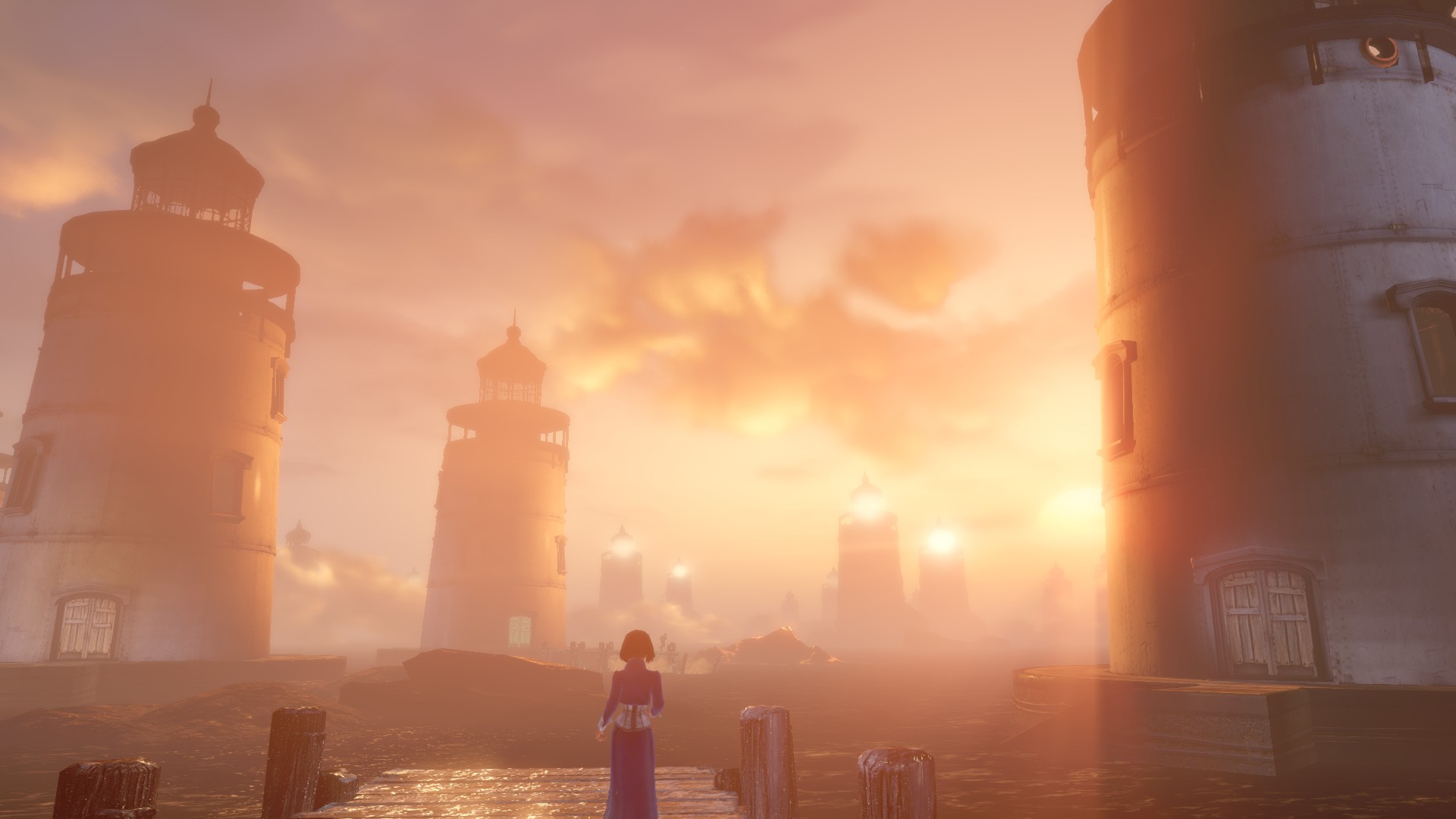 There’s more to it all than this, including who was from which reality, but that’s my take on it. Other places explain more. Once you know DeWitt is Comstock, some things make more sense too. Slate, for instance, is incensed that Comstock proclaims he was at the Battle of Wounded Knee. He says he was not, and DeWitt (who was there) agrees. But since DeWitt is Comstock, it makes sense.

Anyway. That’s the plot. What about the game? 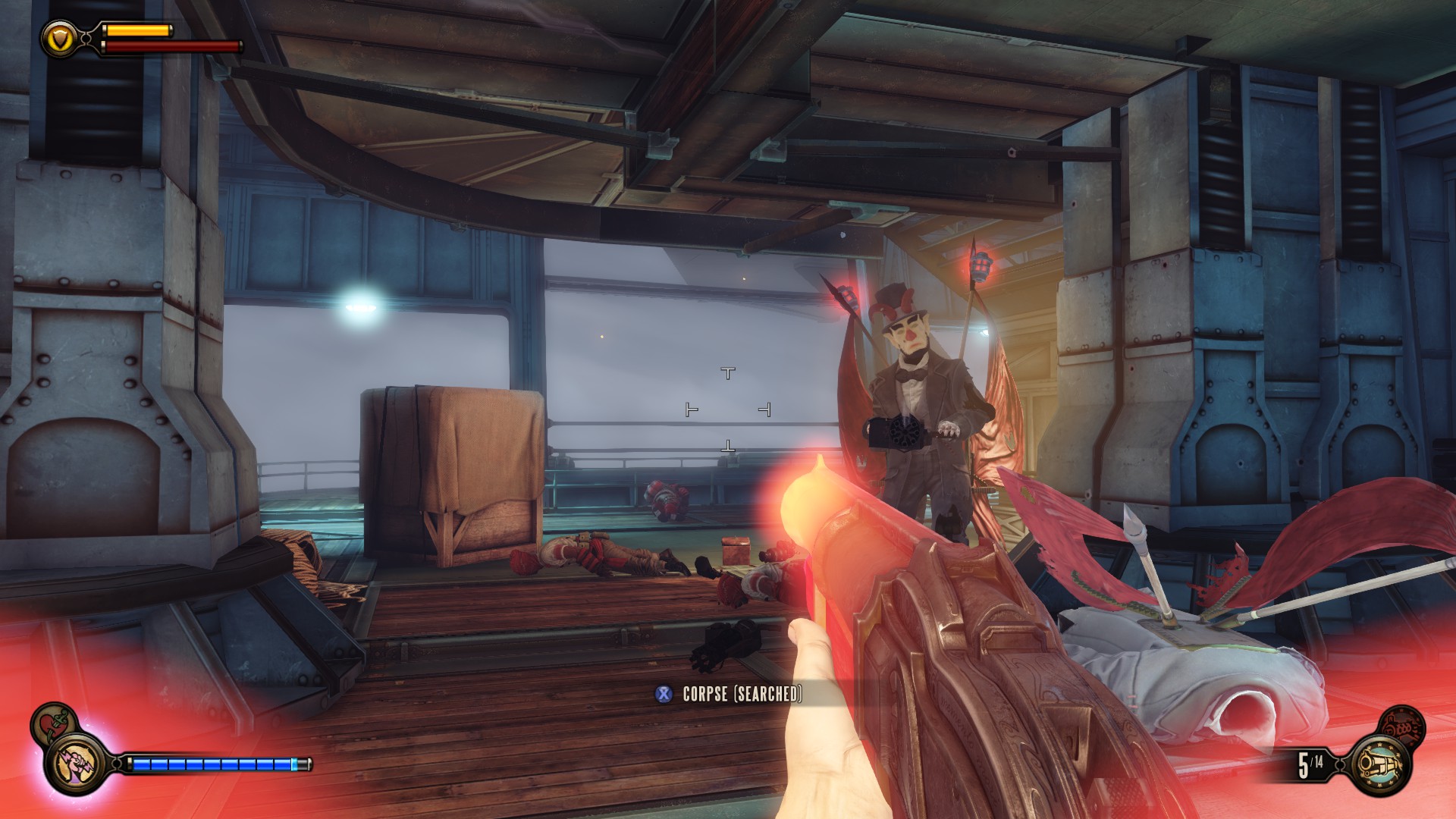 I’ll put it this way: Bioshock Infinite is a great story punctuated with pointless, annoying combat sections. The wonderful trap-setting from Bioshock 2? Gone. What remains are horrible skyrail-heavy fights, mostly useless “vigours”, and never enough ammo. Honestly, I think Bioshock Infinite would have worked much better as a straight narrative discovery game.

Still, I did enjoy it overall and will look out for the DLC being on offer.