Maybe I miscalculated, or maybe my picross skills are now honed to the point where I complete puzzles on autopilot, but it turns out Picross e7 was actually shorter than Picross e6. Not much – 27 1/2 hours compared with about 28 hours, but it was still a surprise.

Like before, there’s some “cheating” going on by reusing the same pictures for both the picross and mega picross modes, which is a shame. Also, you don’t get many “bonus” puzzles for owning other games in the series – just 15 in total. It’s the same as before, but there are 6 previous titles now, not 3!

And that’s all there is to say, really. It’s more picross. And there’s an excellent toilet in it. 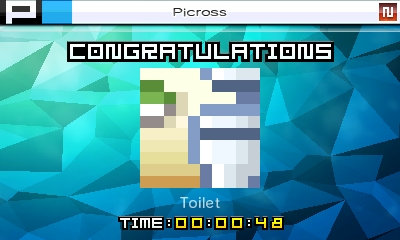