And that, following its pair – Oracle of Ages – from a few weeks back, means that the two best Zelda games have been completed. Again. Like Ages, I originally completed Oracle of Seasons right near the start of this gaming diary’s life. Back then, I finished Seasons first, but this time reversed them. 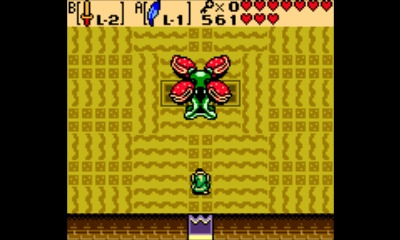 It didn’t make a lot of difference. The extra heart carried over from the more puzzley Ages helped a little in the more combatty Seasons, but that’s all. I did make the mistake of not playing Seasons for just over a week, meaning I’d forgotten what I was supposed to be doing. I admit, I resorted to reading a guide but only to remind me. I did’t make that mistake again.

Seasons seemed easier than I recall. Backtracking was more of an issue than my memory suggests, mainly because of the lack of useful warp points (aka the seed trees). Warp points exist of course, but they never seemed to be near where I needed to go. I ended up using the same two or three and then walking the long walk instead. Maybe if I’d figured out the routes across Subrosia it wouldn’t have been such a trek.

After beating Onox, the final boss, I went on to fight Twinrova. You can only do this once you’ve completed both Ages and Seasons, but I’d done that. Finally, the half-developed form of Ganon needed to be defeated. I was sure Twinrova was difficult last time around, but it seems my memory was faulty again and it was Onox I struggled with before.

And that’s that. Definitely still the best Zelda game(s). Fact.