A little history on this first. Over two years ago, I bought Persona 4 Golden cheap. I’d wanted it anyway – despite not really understanding much about the game besides “JRPG in a modern day setting” – because everyone seemed to rate it. At the time I wrote:

The fantastic yellow submarine/katamari hybrid opening sequence segued into Shenmue before becoming something somewhere between Phoenix Wright and Eternal Sonata, via a Japanese dating sim and The Ring.

Perfectly my sort of nonsense then. I started playing it, got about ten hours in, then just stopped. There were a few reasons. I bought Akiba’s Trip at the same time, and that was vaguely similar but much more accessible. I was also struggling to understand the whole Persona system (I’d never played a game in the series), and I was panicking I’d run out of time to rescue people from the TV which put an unhappy stress into the game.

The longer I didn’t play it, the harder it felt going back to it. I’d pretty much binned the Vita after a few months and so Persona 4 Golden was, sadly, abandoned. 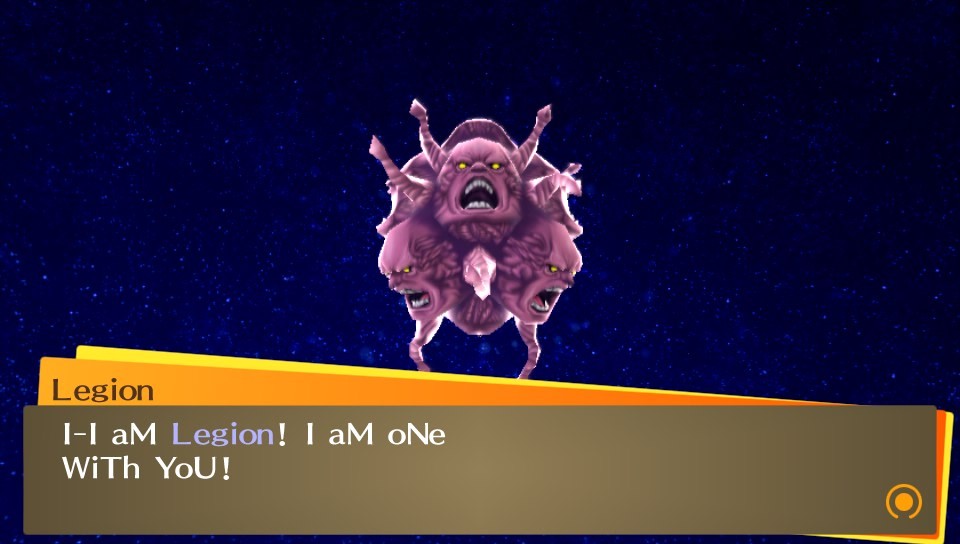 Then, last year, I bought, played, completed and absolutely loved Tokyo Mirage Sessions #FE on the Wii U. It was the Akiba’s Trip aesthetic that drew me in, but it was the Persona-like gameplay that kept me hooked. I quickly realised it was a Persona game in all but name – and not surprising since it’s a spinoff from the same source Persona 4 Golden is. It has some simplified mechanics compared to Persona 4 Golden, with the Performa “soul” system being similar to but much more streamlined than Persona’s, er, Personas. Dungeons were much the same. Items and magic even have the same names and effects. Tokyo Mirage is My First Persona, and having beaten it, I felt like I could return to P4G with a better understanding of how it worked. 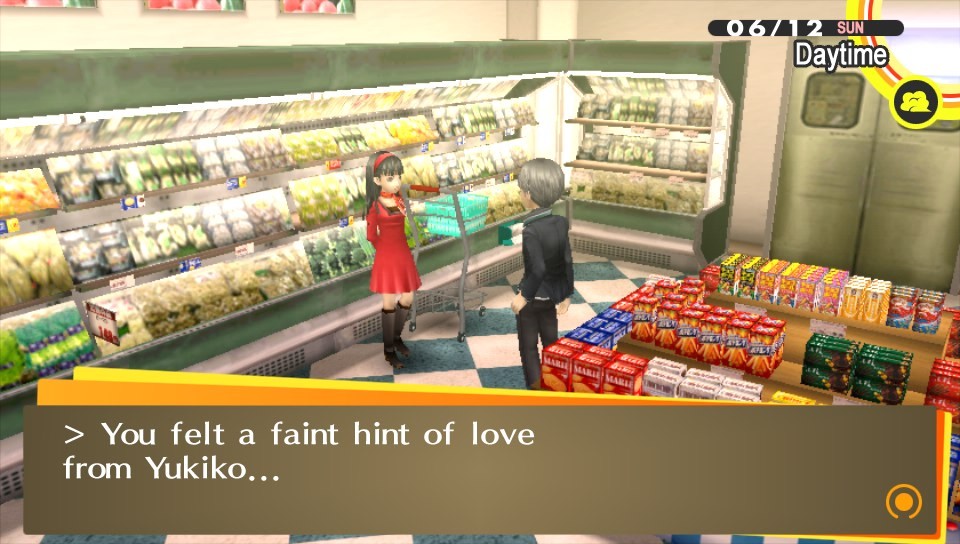 It was still a while before I fired it up again, but I was absolutely right.

A couple of weeks ago, I loaded my 30 month old save (just after saving Yukiko), and I’ve put almost 20 hours into it since then. It’s incredible.

My two main fears – time running out, and not being able to grind dungeons (something you can do in Tokyo Mirage) – were unfounded. Certainly, you can run out of time, but you’ve loads of it and with a tiny bit of planning and some goal setting, it’s not a problem. And while I found you can’t realistically grind a dungeon forever, you can for a very long time once you’ve met the fox and he provides a way to restore SP (the main barrier to indefinite grinding) in the TV without having to leave. It comes at a hefty price, but doing quests for him reduces the cost, and you gain plenty of money bashing baddies anyway. Phew. Sorted. 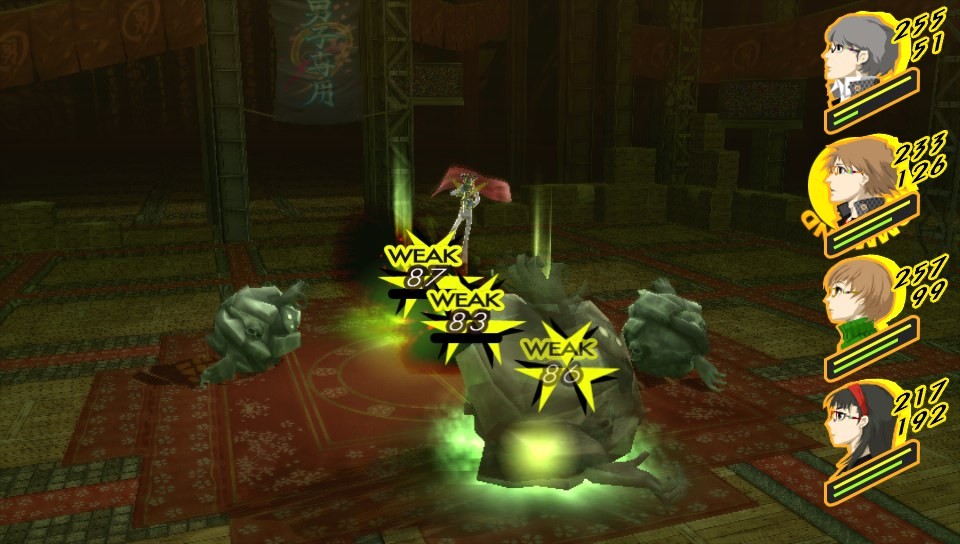 With my worries out of the way, I could enjoy the game. Build up my social links without being concerned that I’m “wasting” an afternoon wooing Chie (of course) instead of levelling up in the TV. I’m seeing the benefits of some of these links already too, as my party are gaining follow-up and team attacks and stuff.

I’ve taken on some part-time jobs, mainly because I was finding I needed Courage for far too many of my conversations and the scary janitorial work at the hospital seemed a good way to raise it. It’s a creepy night shift, cleaning empty wards, but more worrying is the nurse who likes to “teach me about anatomy”. She’s wholly inappropriate, what with my character being 15 or something? 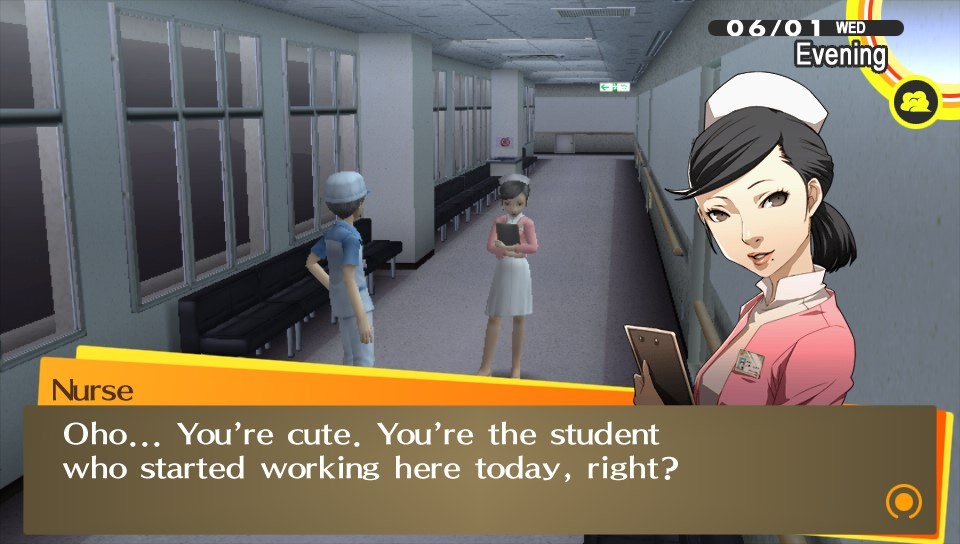 Other parts of the game keep opening up. I’ve recently started to be able to fish, catch bugs, and plant stuff in the garden, for instance. Even 30 hours in I’m still feeling like a beginner and this is still part of the tutorial.

As for story progress, I’ve rescued the person after Yukiko (I won’t say who because spoilers, but that sauna dungeon was something else), and the next victim has just been kidnapped. From the Midnight Channel, it’s a woman in a bikini threatening to take it off.

Oh yeah, and that “Your Affection, Your Affection” (always misheard as “You’re Special” song is constantly in my head now.