Ah, the life of a French artist, living off his art, being French. Literally being some sort of frog like a racist stereotype. In Passpartout, you are this frog painter, and it’s your actual art that you sell.

Well, I say art. With tools even Microsoft Paint would sneer at, it’s not easy creating a masterpiece. Thankfully, as it turns out, whatever algorithm the game employs to determine the value and demand for your painting seems unconcerned with skill and it’s more about colour and complexity, depending on your customers.

Take George, for example. He’s easily pleased. My simplistic pictures of legless caterpillars with giant eyes always sold to him. Mary, however, would sarcastically comment on their lack of complexity and Don simply couldn’t abide the colours I used. 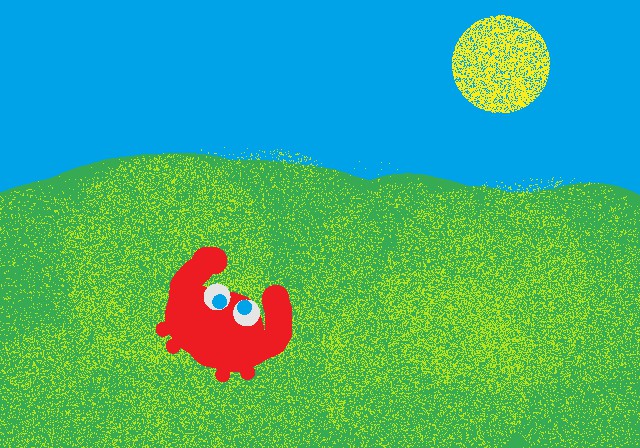 After experimenting with colour schemes and shapes, it seems the more realistic the picture the less chance I’d had of selling it. Generally more abstract shapes (big blocks of cheese went down well for a while), cartoony characters (a number of pictures staring a muscular crab sold for a high price) and those ever loved caterpillars allowed me to progress.

By the third act, it was clear that my clients just wanted grey pillys with big eyes, so I plied them with many variations on the same theme. Eventually I created one that was grey and red, and the massive bid I received for it basically completed the game for me. Which is just as well, as after five hours of creating things that either didn’t sell or were virtually the same as previous paintings, I’d started to flag. There’s probably a message in the end sequence where Passpartout is said to have become very rich, but I suspect he was just a caterpillar sellout and drank himself into oblivion to save the agony of 50 years of repeating himself.

Here’s a load of my “arts”, for your perusal: